Now located at the South Point Hotel & Casino the sports betting network and studio will be heard live on Sirius XM satellite radio. Historically satellite radio stations have played sports betting advice commercials in the past and has most recently banned any type of sports betting until now. The studio is located just outside of the Vegas Sportsbook inside the South Point Hotel and plans to be a comprehensive betting show without the “Tout” aspect that is commonly heard on air. Touts are known to be cocky and are typically those who think they know how to beat the bookmakers. In time there will be 24 hour programming and live streaming videos on VSIN.com. Being the first sports betting network is an exciting thing for the industry. 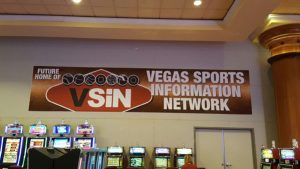 Brent Musburgers career also spanned him covering the Super Bowl, NBA Finals, March Madness, and NCAA’s Final Four. He hosted the NFL Today pre-game show for 14 seasons from 1975-1989 on CBS Sports, did play-by-play announcing for ABC Sports, and most recently was announcing for ESPN’s college basketball games until his retirement to entire the sports handicapping world.

Following the retirement of Musberger from College Basketball he started right up in Las Vegas, Nevada the following week. During the First week of February 2017 he hosted the first VSIN show on Sirius Satellite Radio for Super Bowl 51 where the New England Patriots defeated the Atlanta Falcons in overtime.

The shows take place live at the sportsbook off of the Las Vegas strip. The current hosts and personnel are Jimmy Vaccaro, Vinny Magilulo, Chris Andrews, Ron Flatter, Gil Alexander, Norm Clarke, and Matt Youmans. As of right now broadcasting is live 5 days a week and will be expanding to 7 days a week in Football season.

SiriusXM Satellite Radio sent out an email notification on May 3rd of 2017 to all of it’s users to inform them about new channels and lineups. Mentioned in the email was Channel 204 changing from Sports Play-by-Play on XM and channel 214 on Sirius. The replacement channel as described in the email as:

Vegas Stats – The Vegas Stat & Information Network can now be found on Channel 204 on all SiriusXM radios, making it easier to find no matter what type of radio you have.