Home
Football
Thursday Night Football Recap: Kansas City Chiefs Prove To Be Too Much For Derek Carr Yet Again

Thursday Night Football Recap: Kansas City Chiefs Prove To Be Too Much For Derek Carr Yet Again

Derek Carr and the Oakland Raiders had their chance Thursday night. They had the chance to prove that the Silver and Black was indeed back. They had an opportunity to prove that they were as good as their record would indicate; that they were championship material and a team to be feared. All they had to do was defeat the Kansas City Chiefs on Thursday Night Football.

But once again, they couldn’t do it. 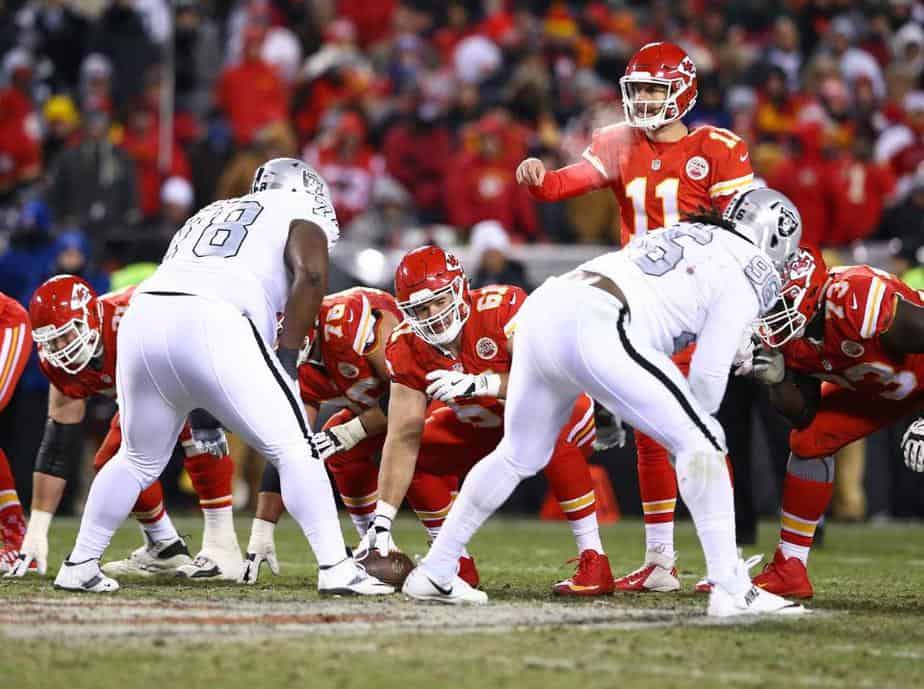 Alex Smith looked like the gunslinger with an arm instead of Derek Carr completing 17 of 26 passes for 266 yards, a touchdown, and an interception. Tight end Travis Kelce was once again his main man catching five passes for 101 yards with a long of 34-yards. The touchdown went to Kansas City’s playmaker, Tyreek Hill, on a 36-yard pass in the second quarter.

Smith is not known for his ability to connect on deep balls, but he couldn’t miss Thursday night hitting five of five beyond ten yards for 138 yards and a touchdown.

Normally, Derek Carr is the one hitting receivers deep, but he had trouble just connecting with his guys against a tough Chiefs defense. He was only 1-10 (for 18-yards) on passes beyond five yards, and only 17 0f 41 on the night for just 117 yards. In the second half, he was just 7-23 for 40 yards.

“As the leader of the offense and the team I feel sick to my stomach that we put something like that out there on film and it hurts,” Carr said. “I can promise you that. We put too much time into this to go and do something like that.”

Carr and the Raiders insist his injured pinkie finger did not impact the game, but for the second game in a row, he didn’t take a single snap from under center going from the shotgun instead. Images captured during the game showed that he wasn’t using his pinkie to help grip the ball on throws.

Recent days had found many calling for Carr to be named MVP, but it was Smith that looked the part—especially in the first half when he completed 11 of 16 passes for 202 yards and a touchdown.

Much of the damage came during an eight minute and 26-second span in the second quarter. The Chiefs score all three of their touchdowns: a 36-yard touchdown pass to Tyreek Hill (14:51), followed by a three-yard plunge by Charcandrick West (8:34) a few minutes later, and a 78-yard punt return for a touchdown by Tyreek Hill (6:25).

After watching their team fall behind, Raiders fans likely hoped to see their defense tighten up, put an end to the Chiefs offense, and give Derek Carr a chance to lead the team back—and they did. When Carr followed up the Raiders third touchdown with a 14 play, 92-yard drive for a touchdown it certainly looked like he was going to do his part. 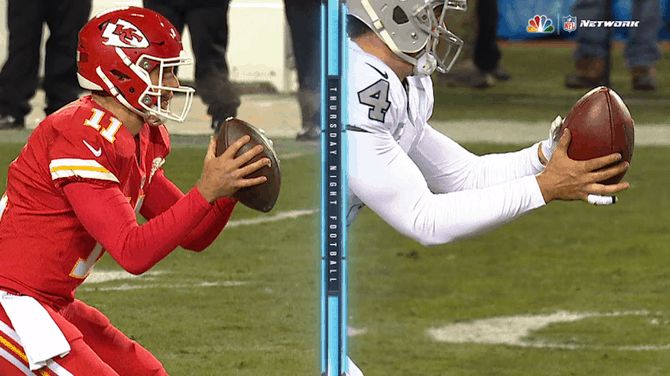 The defense held up their end limiting the Chiefs offense to just 102 total yards (Smith was 6-11 for 62 yards) in the second half and forced turnovers on Kansas City’s first two possessions (interception and a fumble). But all the Raiders offense could do with the turnovers was kick one field goal to close the gap to 21-13.

Oakland best chance to get back in the game came in the fourth quarter on a play where Amari Cooper had shaken his defender on a deep route, but the pass missed Cooper by a wide margin. Replays showed the ball may have changed trajectory (may have hit a camera wire crossing the field) in flight making it hard for Cooper to adjust and make a play.

“That’s why it looked like I might have stumbled,” said Cooper, who had five catches for 29 yards. “I was running in the right direction, and it kind of moved inside at the last minute, and I didn’t have time to get it.”

The loss drops the Raiders into a tie for first with the Chiefs at 10-3, but since the Chiefs beat the Raiders twice, they own the tiebreaker and the division. So, thanks to another bad night against the Kansas City Chiefs, the Oakland Raiders have gone from being the No. 1 seed in the AFC to the No. 5.

However, the Raiders can regain the division lead if they run the table (Chargers, Colts, and Broncos) and either the Titans, Broncos, or Chargers beat the Chiefs.