Home
Football
Thursday Night Football Preview: Oakland Raiders at Kansas City Chiefs—Nothing Like A Game Between Rivals With The Division Lead On The Line

Thursday Night Football Preview: Oakland Raiders at Kansas City Chiefs—Nothing Like A Game Between Rivals With The Division Lead On The Line

There is nothing like a good rivalry game to help boost the ratings of a primetime game. If those two teams happen to be among the best, the league has to offer this season, even better. Should the lead in their division and a guaranteed playoff spot be on the line as well—well, that’s just the icing on the cake.

Fans will be getting just that when they tune into Thursday Night Football to watch the Oakland Raiders and Kansas City Chiefs face off. 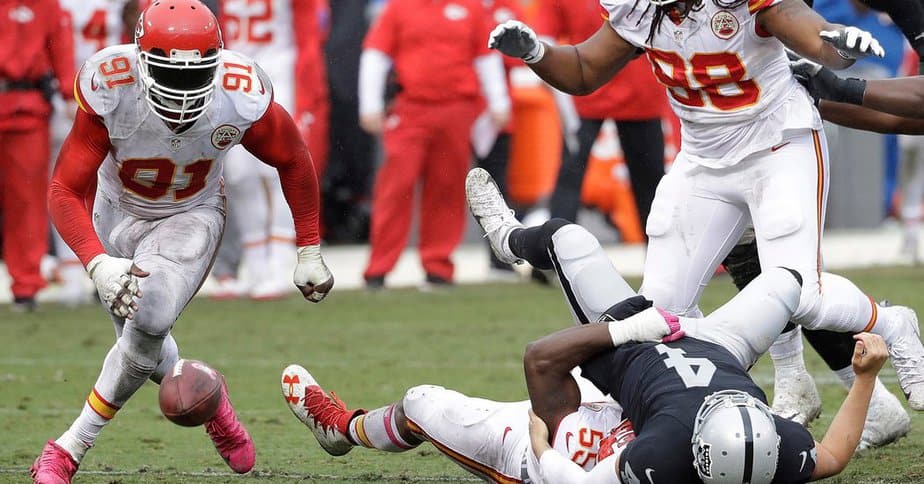 The rivalry alone is usually enough to ensure this ends up being a close, hard-fought game, but this time, control of the division will also be on the line. Oakland currently sits alone in first with a 10-2 record. Kansas City is in second at 9-3. With a win, the Raiders can create an almost insurmountable lead. But should they lose, the Chiefs would be in first having defeated the Raiders twice.

So—the Raiders must win if they want their first division title since 2002. However, to do so, they must play much better than they did when the two teams met earlier this season. The first half was competitive (13-10, Chiefs), but the second half was all Kansas City. The Chiefs added another touchdown and a pair of field goals, shut the Raiders out, and won 26-10.

Oakland’s defense had no answer for an efficient Chiefs offense. Alex Smith was nearly perfect on the day connecting on 19 of 22 passes for 224 yards. Spencer Ware had his first (and only) 100+ yard day of the season with 131 yards and a touchdown on 24 carries. Jamal Charles tacked on another touchdown on the ground as did defensive lineman Dontari Poe.

But Derek Carr has been playing lights out lately. He’s thrown 12 touchdowns passes over the last five games and only two interceptions. He’s averaged 313 yards/game and completed 65 percent of his passes. You can’t ask a player to do much more than that—but he can’t seem to play that way against the Chiefs.

Kansas City’s defense has had Carr’s number in the five times they have faced each other (Chiefs won four of them). His most productive day came last December when he completed 31 of 48 passes for 289 yards and a pair of touchdowns, but he also had three interceptions. They all came in the second half, two set up touchdowns and the third was returned for one. The Raiders had scored to take a 20-14 lead on the drive before the first interception and went on to lose 34-20. 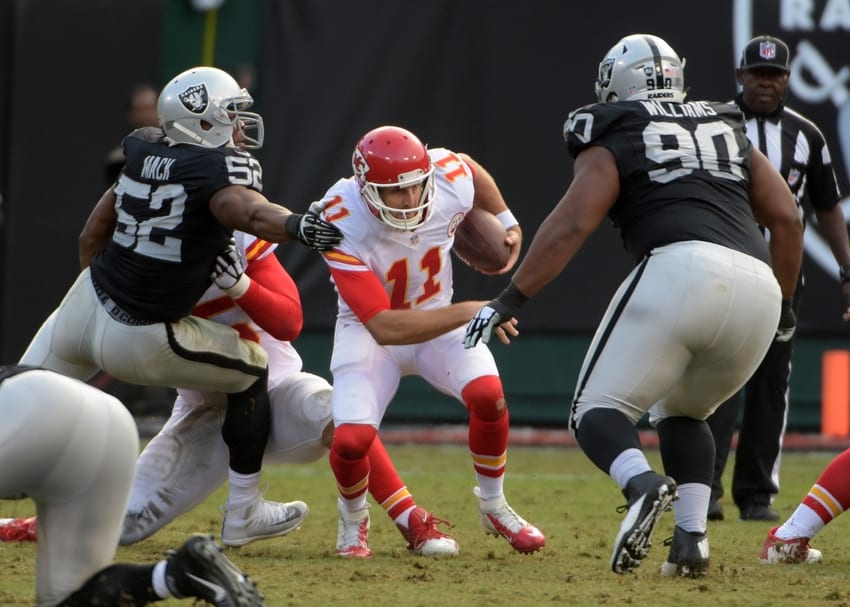 The win brought an end to Kansas City’s 16-game winning streak over the Raiders.

The key to victory for the Raiders this time is two-fold: Carr can’t make mistakes and the defense. For the offense to be successful, Carr can’t slip up. It’s that simple. It would be nice if a run game could be generated, but the Raiders have won a few games this season without much of one.

The defense was expected to be a strength for the Raiders coming into the season, but for much of the year, it hasn’t been. After finishing last season No. 11 in the league in total defense, the Raiders are currently No. 30. However, during the last five games, there was a point where the defense clamped down on the opposition and opened a window for Carr to work his magic (and he did).

Oakland needs to play mistake-free football. Kansas City has thrived by doing so; Oakland’s defense needs to force Alex Smith to make a mistake. Should that happen—Oakland will win. But if there are no mistakes—advantage, Kansas City.