When the Houston Rockets acquired James Harden back before the 2012-13 season, they knew they were getting a pretty good basketball player. Anyone that wins the Sixth Man of the Year Award (like he did for the 2011-12 season) can’t be half bad. Does that mean he can handle starter’s minutes?

No, but he has since proven not only that he can, but that teams should absolutely “fear the beard.”

For proof, you just need to look at his game the last time he took the court—Friday night against the 76ers in Philadelphia.

The Philadelphia 76ers decided they would try to clamp down on Houston’s three-point game Friday night—so James Harden made them pay with a rather historic game. Harden went 16-28 from the floor, including 6-11 from behind the arc (and 13-14 from the free throw line), to score 51 points on the 76ers and lead the Rockets to a 123-118 victory.

It was his second 50+ point game of the season and his fifth since joining the Rockets back in 2012. No other player in Rockets history has more than two 50+ point games—but the history doesn’t end there.

Harden also had 13 rebounds and 13 assists on the night to record his 14th triple-double of the season, fifth with 40+ points, and second with 50+. Along with his 51 points, his efforts led directly to 80 points being scored for the Rockets. So—what makes that historic? Many things do:

When he’s not recording triple-doubles, he is still making an MVP-worthy contribution to the Rockets. Since putting up 53 points, 16 rebounds, and 17 assists against the New York Knicks on New Year’s Eve he has averaged 31.8 points, 11.1 assists & 8.9 rebounds.

Many consider him the front-runner for the MVP with the numbers he’ throwing up, but many are leaning towards giving that honor to Russell Westbrook. It would be hard to argue with him getting it over Harden if he continues to average a triple-double this season—depending on how much weight you put into how well a candidate’s team does. 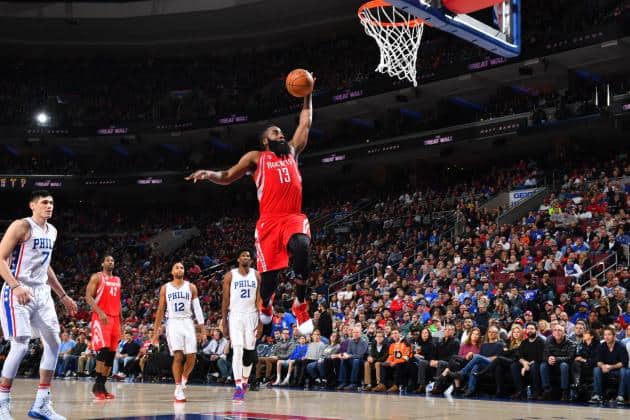 Harden’s Rockets are currently shaping up to be the No. 3 seed in the Western Conference this season come playoff time, and Westbrook’s Thunder is sitting pretty at No. 6—which would mean the first round of the playoffs could pit the two triple-double machines against each other.

Now talk about must see TV!