The Texas Longhorns do not have an impressive record this season, but the remaining teams on their schedule know that they can’t take Charlie Strong’s boys for granted. The team that lost to three in a row earlier this season is not the team that is showing up now. Yes, the Longhorns still have some issues on defense, but if you aren’t careful, their offense will run you into the ground.

Texas needed to get everything they could out of its running game with its defense facing a quarterback like WVU’s Skylar Howard—who could easily pick apart the Longhorns secondary if given the opportunity. He certainly looked pretty good when he connected with Ka’Ruan White on a 29-yard touchdown pass early in the second quarter to give the Mountaineers a 17-3 lead.

But the Longhorns were not fazed by the early deficit and managed to battle back to close the gap to 17-13 at halftime. D’Onta Foreman led the way for the Longhorns with over 100 yards rushing in the first half making it 11-games in a row with 100+ yards rushing (tying the record held by Earl Campbell).

It wasn’t a bad first half for the Longhorns, but it could have been better. West Virginia’s defense was tougher than the ones they had seen in recent weeks. But when you go on a 20+ play drive that lasts almost half of a quarter, you need to end it with a touchdown—not a field goal. The defense got it together in the second quarter, but could they keep it up in the second half?

As maligned as Charlie Strong’s defense has been, they didn’t do a bad job against one of the better offenses (No. 10) in the country. West Virginia ended the day with just 383 total yards, well short of the 510 they typically gain. A defense that at one time struggled with forcing turnovers, Texas had four including three interceptions in the second half.

But then another issue reared its ugly head once again for the Longhorns—an inability to take advantage of turnovers. On the drives following the turnovers, the Longhorns failed to get a first down and punted, missed a field goal, scored a touchdown, and fumbled.

However, while they failed to take advantage of the turnovers but the defense held the Mountaineers to just a touchdown in the second half which gave the offense a chance in the end. With the ball on their own 12-yard line and only 77 seconds to play, Buechele marched the team quickly downfield, but the drive stalled at the West Virginia 27. The refs reviewed the last play to make sure West Virginia didn’t have 12 players on the field, but the play was eventually confirmed–game over. 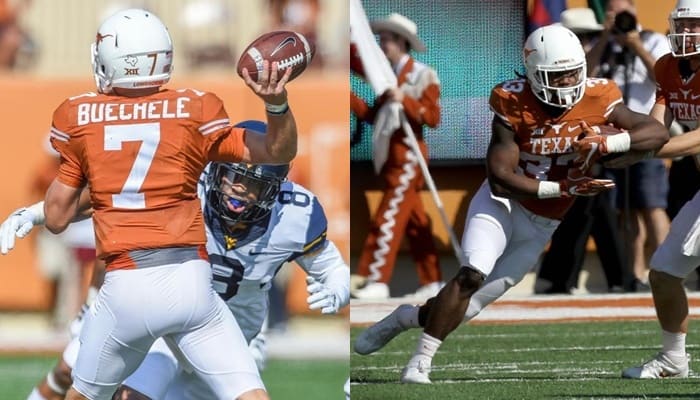 With the loss, the Longhorns record falls to 5-5. They’ll need to win one of their final two to become bowl eligible. It’s the third straight five-loss season for Strong at Texas, something he promised would not happen again after the first one.

Becoming bowl eligible shouldn’t be a problem for the Longhorns with how the offense has been playing. Their freshman quarterback broke the freshman passing record previously set by Colt McCoy with a 318-yard day. With 536-total yards of offense, the team broke the school’s single-season record with its sixth 500+ yard offense day of the year (NCAA).

For West Virginia, the win means that next week’s game against the Oklahoma Sooners at home will essentially be for the Big 12 title. With how Baker Mayfield is playing, they will certainly need to clean up the mistakes if they want to beat the Sooners for the first time since joining the Big 12.