Few (if any) agreed with the committee naming Texas A&M the No. 4 team in the nation and not an undefeated Washington. But the committee cited strength of schedule as the reason and the Aggies have played a much tougher schedule than the Huskies. Of course, for that to matter, Texas A&M had to keep winning—and they haven’t.

As far as many college football fans will be concerned, the egregious error the College Football Playoff Committee committed in the first poll of the season (released last week) can now be corrected. An unranked Mississippi State team ran over, around, and through the Texas A&M defense, the Aggies offense couldn’t do much after losing Trevor Knight to an injury, and the Bulldogs went on to upset the No. 4 team in the nation, 35-28.

If anyone was going to knock the Aggies out of the top four, most expected LSU to be the guilty party—and maybe the Aggies had started to look ahead. They sure didn’t seem to have their heads in the game when they let Mississippi State quarterback Nick Fitzgerald take the ball 74 yards for a touchdown on the Bulldogs first play of the game.

Teams have gotten out to an early lead against the Aggies all season, so the situation wasn’t anything new. Even when Mississippi State extended the lead to 14-0 there wasn’t much reason for worry on the Texas A&M sideline—but then quarterback Trevor Knight landed on his elbow/shoulder when he dove into the end zone for Texas A&M’s first touchdown of the season.

Knight missed the next series for Texas A&M while he was back in the locker room getting looked at. He returned the following series, but after getting slung down on his injured elbow/shoulder while running out of bounds later in the second quarter he was done for the day—and so were the Aggies.

Jake Hubenak did an admirable job in relief of Knight completing 11 of 17 passes for 222 yards, two touchdowns, and an interception—but he is not the dynamic player that Knight is. Without Knight in the lineup, the Texas A&M offense lost most of its swagger.

But when it comes down to it, this one is on the defense. The A&M defense simply had no answer for the Mississippi State running game. At the start of the second half, it appeared that Texas A&M might have made the necessary adjustments on defense to contain the run, but as the half went on the holes seemed to get bigger. 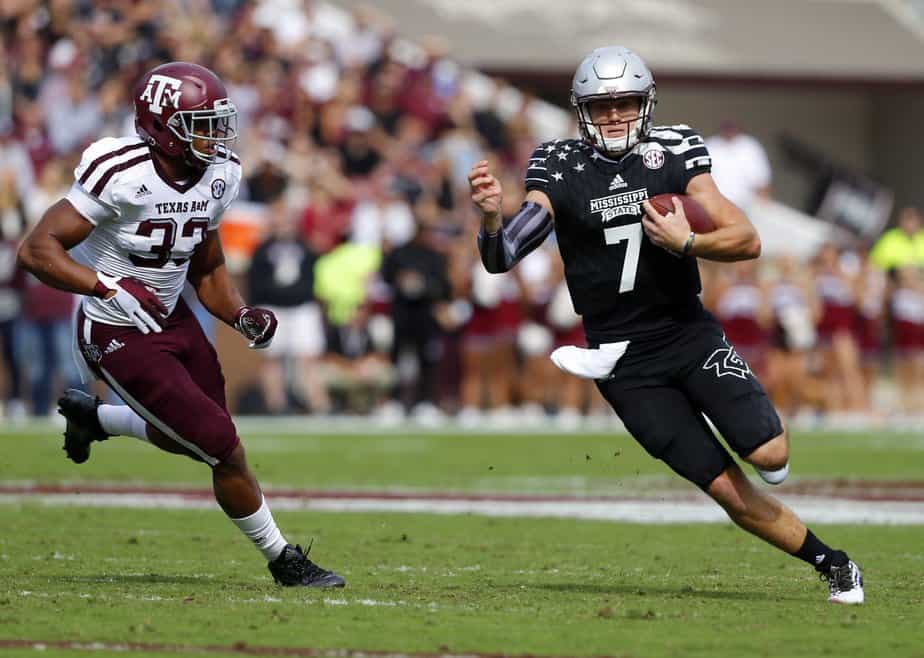 Despite all the yards the team had given up, a big play by the offense—a 54-yard touchdown pass from Hubenak to Christian Kirk—had the Aggies in the game early in the fourth quarter, down 28-21. They just needed the ball back.

But the defense just couldn’t get it done.

Fitzgerald proceeded to ice the game by taking the Bulldogs on a 14-play, 73-yard touchdown drive that ate up most of the time left on the clock (7:34)—primarily short runs. Since the Aggies couldn’t stop the run, why do anything else?

Hubenak made the final score look a little better by closing the gap to 35-28 with a seven play, 75-yard drive. The defense finally forced a three and out on Mississippi State’s next drive, but the Aggies only had 21 seconds to make a miracle happen.

But Hubenak threw an interception instead to end the game.

Texas A&M has struggled to stop the run for years. At first, it appeared as if they might have finally gotten something figured out this year (ESPN). They held UCLA, Arkansas, Auburn and South Carolina to an average of 160.5 yards a game. But the last three Power 5 teams (Tennessee, Alabama, Mississippi State) have gashed them for an average of 311.3 yards with Mississippi State doing the most damage with 365 yards (574 total yards).

It was the fifth time this season the A&M defense surrendered over 400 yards of offense and the second time they allowed over 500. Following the game, every defender declined interview requests. 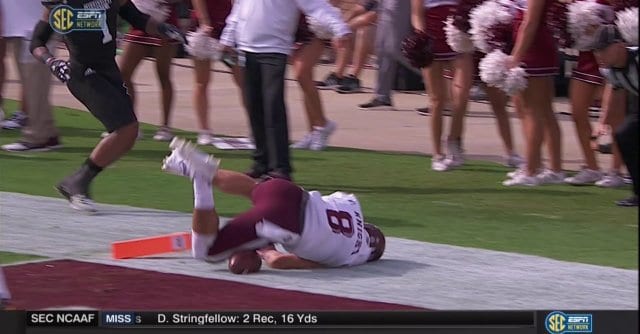 Maybe if Trevor Knight was healthy, he could have kept the offense on the field long enough to give the defense a rest and score some points—or maybe he wouldn’t have. But teams must be ready to play no matter who they lose.

When the next poll comes out, Texas A&M will likely be nowhere near the top four. The question fans must ponder till then is whether No. 5 Washington will be elevated or if Ohio State will leapfrog the Huskies (assuming they beat Nebraska).