For most of the game, it looked like the Falcons were going to win. The defense played Patriots quarterback Tom Brady exactly like they needed to. They got pressure on him without having to blitz, recording five sacks and eight hits. An argument could be made that the pressure led to Robert Alford’s interception and Brady’s first postseason pick-6. 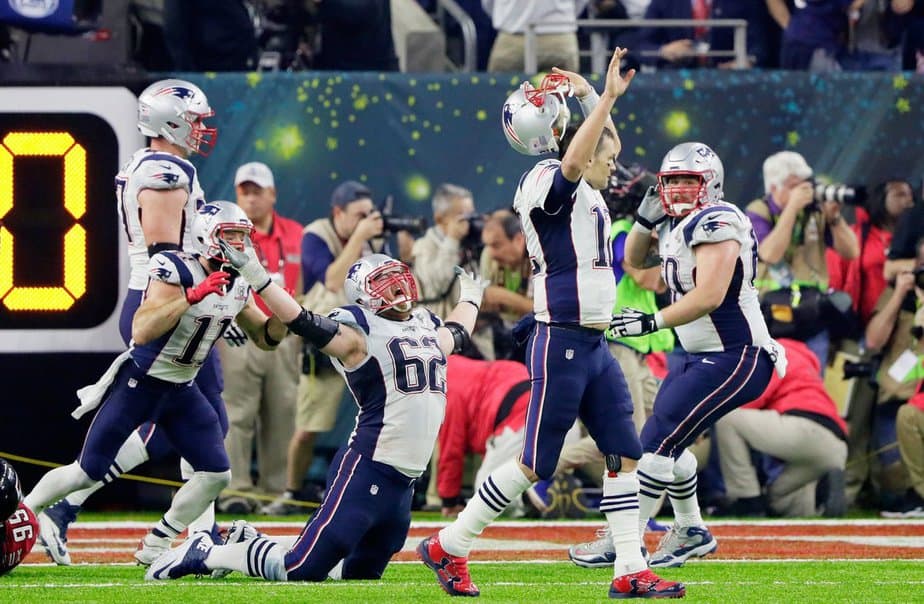 After a slow start on offense, Matt Ryan got the ball moving late in the first quarter after Robert Alford recovered a LeGarrette Blount fumble. Five plays later, Devonta Freeman trotted into the end zone from five yards out to give Atlanta a 7-0 lead.

Atlanta’s defense forced a three and out on New England’s next possession, and Matt Ryan got the Falcons back in the end zone five plays later with a 19-yard pass to Austin Hooper. New England looked like they were going to get on the board on their next drive. But Robert Alford’s interception put an end to the drive and put six on the board for the Falcons instead.

Brady managed to get the Patriots on the board with a field goal by the end of the half to make the score at the break 21-3. No team had ever overcome more than a 10-point lead in Super Bowl history. So, if the Patriots were going to pull this one out, they would have to make history.

But then Stephen Gostowski nailed the upright with the extra point attempt. 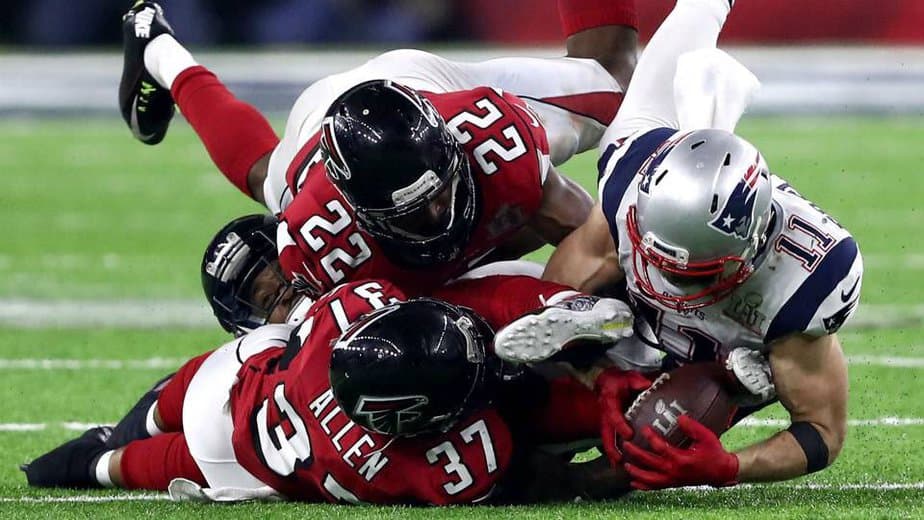 Time was running out for the Patriots. They defense forced a three and out on Atlanta’s next drive, but the Falcons burned up the rest of the third quarter. That meant the Falcons would only have a quarter to overcome a 19-point deficit while keeping the Falcons from putting any points on the board.

Taking 12 plays and over five minutes to put up a field goal on their next drive nearly made the task look impossible. Yes, they were only down by two scores, but they would need to convert two-point conversions on both and had less than ten minutes to play.

They needed a big play in the worst way possible if they were going to stand a chance—and they got it in the form of a Matt Ryan fumble recovered by Dont’a Hightower at the Atlanta 25-yard line. Five plays later, Danny Amendola took a direct snap six yards for a touchdown, and James White ran in the two-point conversion to close the gap to 28-20.

With less than six minutes on the clock, the odds were still in Atlanta’s favor. If they could score or ground out a few first downs on their next drive they could secure the win—and nearly did. A fantastic catch by Julio Jones set the Falcons up at the New England 22-yard line. A one-yard loss by Devonta Freeman followed Matt Ryan getting sacked for a 12-yard loss put the Falcons on the edge of field goal range.

But a holding penalty on Jake Mathews took care of that. 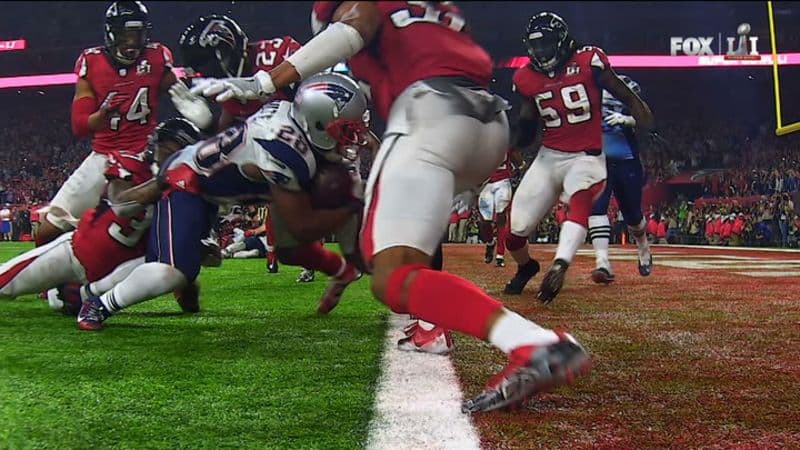 Three and a half minutes was more than enough time for Tom Brady to drive the team 91-yards downfield for the game-tying score. The Atlanta defense appeared gassed and had trouble tackling. The pass rush wasn’t getting to Brady much either. With 57 seconds left, a one-yard run by James White put the Patriots in the end zone, and a pass to Danny Amendola tied the game up at 28-28.

Atlanta couldn’t do anything with the ball on its final possession, so the game went to overtime—a first for the Super Bowl.

With how Tom Brady was carving up the Falcons defense, Atlanta needed to get the ball to start overtime, but the Patriots won the coin flip. Eight plays later James White completed the first overtime game in Super Bowl history with a two-yard dash into the end zone to make the final score 34-28, Patriots.

Tom Brady was named the MVP after completing 43of 62 pass attempts for 466 yards and two touchdowns. But an argument could have been made for White who had 139 all-purpose yards (29-yards rushing, 110 receiving off a Super Bowl record 14-receptions) and three touchdowns (one receiving, two rushing).

Atlanta will have the entire off-season to think about how they gave up a 25-point lead in the Super Bowl (a new record) and allowed 31-unanswered points. 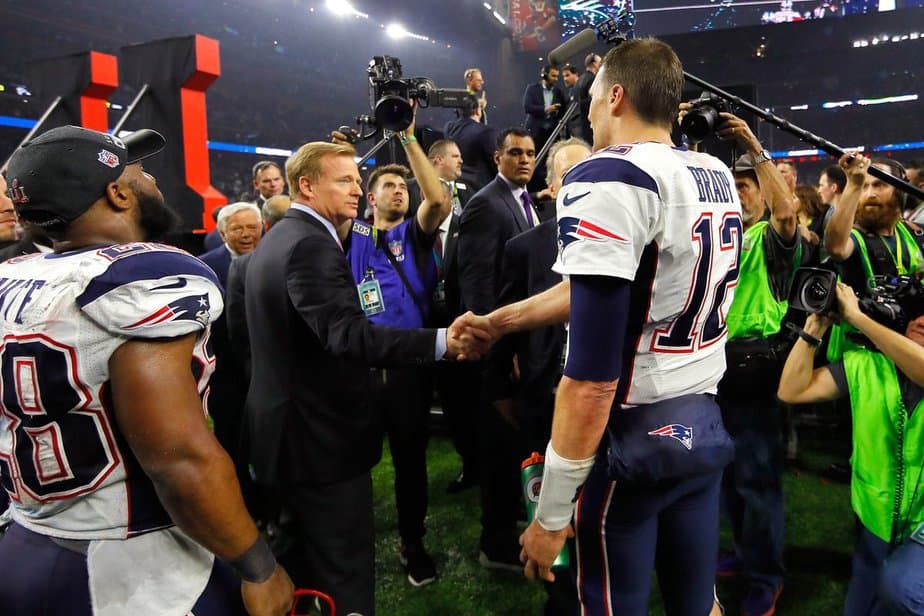 For Patriots fans, it is the perfect end to a season that started out as anything but with their quarterback serving the dumbest four-game suspension in NFL history. While Brady nor Patriots owner Rob Kraft directly addressed Deflate Gate with their comments on the field, Kraft alluded to it:

“Two years ago, we won our fourth Super Bowl down in Arizona, and I told our fans that was the sweetest one of all. But a lot has transpired over the last two years, and I don’t think that needs any explanation.

“I want to say to our fans, our brilliant coaching staff, our amazing players who were so spectacular, this is unequivocally the sweetest.”