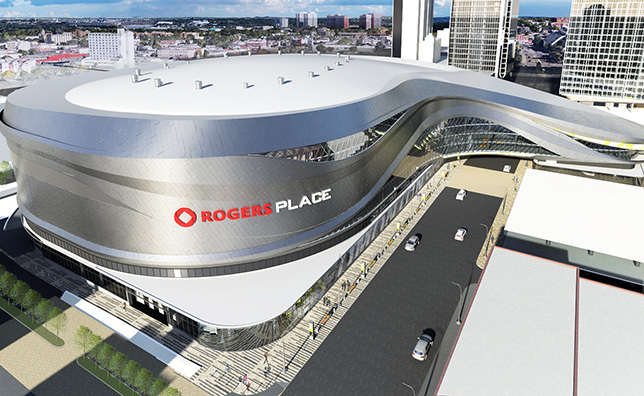 The arena was built in 2014 with the intent of replacing the Oilers old and aging home-arena, Rexall Place which opened in 1974.

The cost of the arena was originally estimated at $450 million, with the city of Edmonton paying $125 million of that cost. The actual price of the stadium was much higher after completion with the price of $604.5 million.

The stadium is located right in the middle of the public transit system, the Edmonton Light Rail Transit, which is a great way for fans to travels to and from the games.

• The framework for the construction of the stadium was first approved on October 26, 2011 by the Edmonton City Council by a vote of 10 to 3.

• After the original deal fell through due to the Katz Group’ aggressive demands and negotiating, another deal was reach on May 15, 2013 and approved by the Edmonton City Council.

• A $2.5 billion development project in downtown Edmonton was connected to Rogers Place as of December 8, 2014.

• Construction of the stadium took over two years with the ground breaking held on March 3, 2014 and the stadium opened September 8, 2016.