If you go to a Houston Rockets game thinking you are going to see some crazy, rim-rocking dunks—well, you will probably see a few. But if you go hoping to see them make it rain from behind the arc your wish will likely be granted. Houston is on a ridiculous pace when it comes to attempting three-pointers (over 40 a game).

Clearly, their philosophy is to live by three and die by the three—but hopefully, win more thanks to the three. They put that philosophy to the test Wednesday night against the Los Angeles Clippers. Of their 87 shot attempts, 52 of them were from three-point range.

“You don’t really realize how many we are taking until you hear later because it’s so naturally the way we play,” said Ryan Anderson, who had 23 points and a team-high six 3s. “It’s fun basketball when you trust the next guy to give up the shot and make the right play to get the open look.”

The Clippers held a 37-34 lead after the first period. A few minutes into the second they still had a one-point advantage, 44-43, but then things went south for the Clippers very fast. A three-point play by Clint Cappella followed by a Louis Williams three-pointer, and another by Eric Gordon gave Houston a nice eight lead.

Los Angeles outscored the Rockets 25-14 in the final period to make the game look a little better than it actually was.

Houston head coach Mike D’Antoni was quick to praise his team after the game (NBCSports):

“Probably our best game start to finish. It started early in the quarter when our second group came in and did a heck of a good job. It was a combination of things. They didn’t play particularly well. They missed a few shots and James was picking them apart.”

The win is Houston’s seventh in their last nine games and improves their season record to 43-19. They had lost their last time out, 117-108 against the Pacers. The Rockets only made 10 of 45 attempts from behind the arc in that game.

Since the all-star break, the Rockets have made 72 of 206 three-point attempts. They have attempted over 2500 three-pointers so far this season and have made 912 (36.3 percent). 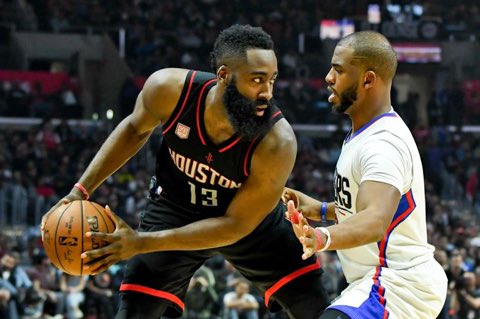 Houston is in third place in the Western Conference and eight games back of Golden State for the No. 1 seed and 4.5 behind the San Antonio Spurs for the No. 2 seed with 20 games left to play. They have a tough stretch ahead with Memphis up next Saturday night followed by San Antonio, Utah, Chicago, and Cleveland.

The Clippers will try to get back on track Friday night with a trip to Milwaukee to play the Bucks.