This Saturday we will see a showdown between the Orlando Magic and the Cleveland Cavaliers. It goes without saying that the Magic will have their work cut out for them as they travel to face the reigning champions at the Quicken Loans Arena on Saturday, October 29th.

Orlando is currently 0-2 and sits at the bottom of their division, while the Cavs are the complete opposite with a 2-0 record and are on top of theirs. Obviously the Cavs are the complete favorites but let’s look at some statistics and see whether Orlando can at least put up a good fight. It is clear why the over/under has been set at 205 and why the opening line has Cleveland as the -12 favorites.

First off, lets take a look at some of the stats of both games going into the tonight’s match-up!!! 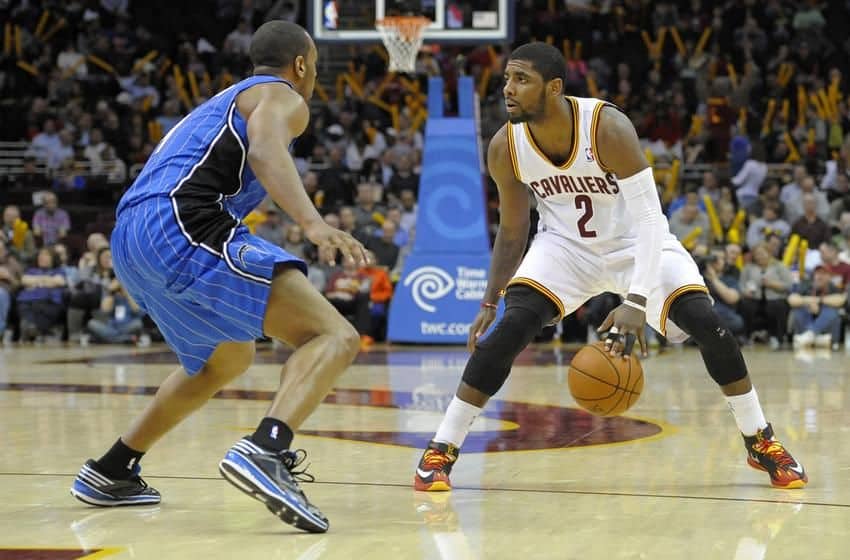 Kyrie Irving has started off the new season averaging 27.5 ppg!!!

The Orlando Magic have other thoughts in mind during the preseason and hoped for a much better start of the season. Considering the fact that the Magic only averages 96 points per game this season, setting them at 26th in the NBA, it is obvious that Orlando will have to score a lot more on Saturday to even have a fighting chance. On the other hand, Cleveland outscores them by a whole lot, averaging about 117 points this season they are ranked at 4th in the NBA. Orlando’s shooting percentage is a miserable 39% which puts them at a low 29th, while Cleveland does substantially better averaging 48% which makes them 9th in the league. The Cavs have also recorded an average of 31 assists and 64 rebounds which rank them an impressive 1st and 3rd in the NBA. Meanwhile, Orlando only put in 52 rebounds and 20 assists per game, which again puts them in the bottom half of the table on 17th and 21st.

In the defensive department, you guessed it, Cleveland once again outperforms Orlando significantly. The Magic allowed 108 points per game rendering their defense practically useless while the Cavs only allowed 88 which puts them at number 1 in the league. The Champions also allowed 50 rebounds a game which ranks them 11th and they gave up 17 assists per contest which puts them in 3rd in the league. They also forced 18 turnovers per game which ranks them 5th in the NBA. Orlando will quickly need to beef up their defense if they want to stop Cleveland, since they allowed 64 rebounds and 27 assists per game which put them at 28th and 24th. They also force only 12 turnovers per game which made them 20th in the NBA. 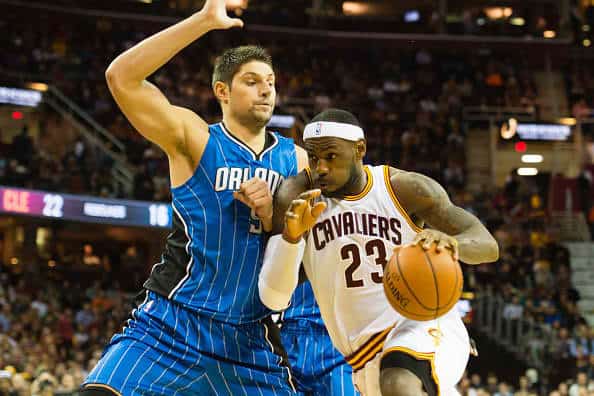 Nikola Vucevic and LeBron James will try to lead their teams to the victory!!!

Cleveland has not seen many roster changes during the off-season, which means that, naturally, all eyes will be on LeBron James to see what kind of magic he will perform this time around.  With a tally of 19 points, 11 rebound and 14 assists while playing 32 minutes per game in the new season, it is obvious who will be the main threat.  He also has a 64% field goal and 50% free throw percentage. Kyrie Irving has also been huge, as expected, averaging 27.5ppg, 4.0rpg and 5.0apg in 34 minutes of action. Irving has been especially good from behind the arc shooting over 56%.

On the other side, Orlando’s main man Nikola Vucevic averages 17 points, 14 rebounds and 13 assists in 36 minutes per night in the new season, while his field goals % have been at 50% so far. The new guy on the block, Serge Ibaka adds another 14 points per game and 7 rebounds during 36 minutes on court. However, Ibaka has not very precise from the field, shooting only 35%.

The Orlando Magic are 0-1-0 against the spread

The Orlando Magic are 1-0-0 against the over/under

The Cleveland Cavaliers are 1-0-0 against the spread

The Cleveland Cavaliers are 0-1-0 against the over/under