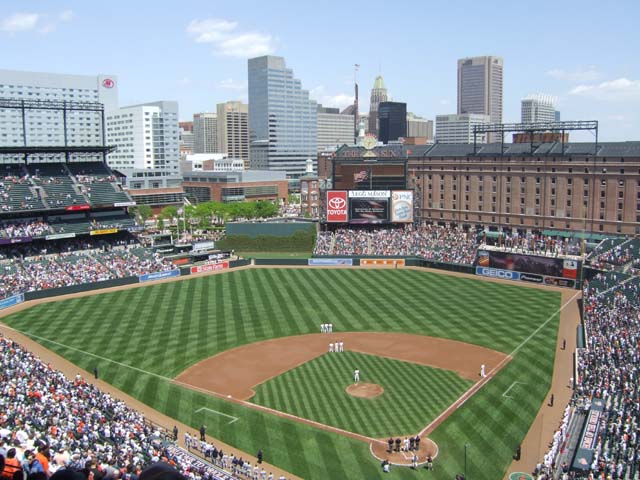 Commonly referred to as Camden Yards or simply, Oriole Park, it’s a ballpark located in downtown Baltimore, maryland and serves as the home field for Major League Baseball’s Baltimore Orioles.

Often considered to be the first retro-style ballpark of the modern era, Oriole Park at Camden Yards has inspired a number of other old-style parks since its construction.

The field is tucked up against an old B&O Warehouse which towers over the right field area and is now filled with offices and private club spaces.

Eutaw Street, the street that sits between the field and the warehouse has been hit a few times with long home run balls which the Orioles organization marks with bronze plaques to commemorate each.

• Construction of the stadium took just under 3 years with ground broken on the project on June 28, 1989 and the stadium being opened on April 6, 1992.

• Renovations have been made throughout the stadium’s history including new HD video display screens in 2008, and a new sound system added in 2009.

• Ken Griffey Jr. became the first person to ever hit the warehouse with a home run during the 1993 All-Star Game Home Run Derby contest.