Miami is not a bad team at all. They are far from being one of the best scoring teams in the nation (No. 199), but they are one of the best defensive teams the country has (No. 17). Good? Yes—but more talented than the North Carolina Tar Heels? There are probably few that will say yes with a straight face.

But talent didn’t matter a whole lot when they took on the No. 9 Tar Heels Saturday. The team that won was simply the team that wanted to win more than the other.

North Carolina got out to a 16-15 lead about six minutes into the game, but over the remainder of the half, they couldn’t buy a shot if their lives depended on it. They missed 18 of their final 19 shots in the half and managed just six points over the final 13:41 while the Hurricanes scored 24 to take a commanding 39-22 lead at the break.

It never really got much better for the Tar Heels. They fell behind by as many as 22-points in the second half and were never able to get closer than 11 points. In the end, they lost by 15 to the Hurricanes, 77-62.

North Carolina head coach Roy Williams didn’t hold back when he talked about the difference in the game—Miami simply played a lot harder than his guys did.

“It was a big-time kicking of our rear ends,” Williams said. “They were more aggressive in everything they did.”

The difference was clear on one play during the second half when the ball was on the floor:

“The ball was lying on the floor, and we didn’t have anybody dive for it,” Williams said. “They got it and made a 3. That was a big play.”

The loss brought an end to North Carolina’s seven-game winning streak in dubious fashion. The Tar Heels had a terrible night from the floor (35 percent; 29.2 percent from three-point range), were out-hustled on the boards (41-36), and committed too many turnovers (14; Miami had ten).

It was also North Carolina’s second game in 48 hours which could help explain the lackluster effort and why the loss hasn’t put a damper on the confidence of the Tar Heels:

“It’s not like this loss counts as 20,” Tar Heels forward Kennedy Meeks said after the game. “We’ve got a lot of season left.”

North Carolina has averaged more than 88 points a game and had scored at least 85 points in every game during the win streak (a school record). But when most of your best shooters have incredibly bad nights, it is going to be hard to score enough points to win. Justin Jackson, the team’s leading scorer, chipped in 21 but he didn’t get much help from Joel Berry II, Kennedy Meeks, or Isaiah Hicks. 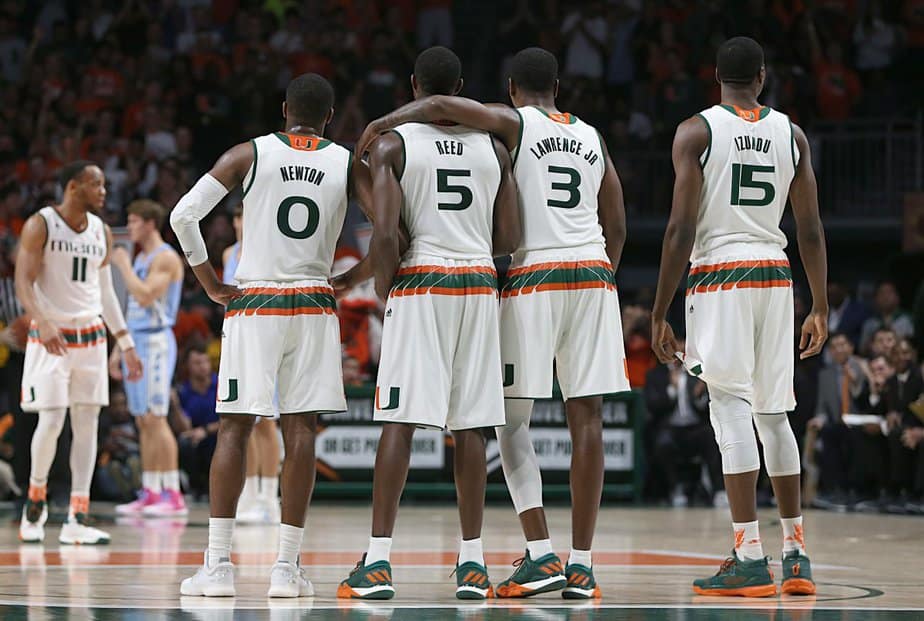 The trio was 4-17 from the field and combined to score 14 points.

Miami’s Bruce Brown led all scorers with 30 points (a new Miami freshman record) and didn’t miss a shot until he had already recorded 23-points.

The win will open the eyes of a few voters, but if Miami really wants to open the eyes of voters they will take down a reeling Florida State team the next time they take the court (February 1). North Carolina will hope to get back on track when they take on Pitt Tuesday night.