In one sense, the Duke-North Carolina game meant nothing Saturday night. North Carolina had already locked down the ACC regular season title. At worst, they are going to be a No. 2 seed in the Tournament. Their immediate future was already set. Of course, you can’t tell the fans or the players it didn’t matter. As far as they are concerned, any game against their biggest rival is one of the most important games of the season.

With the way the Tar Heels played Saturday night, that was pretty evident.

The Tar Heels played it smart and used their size to dominate the Blue Devils in the paint and a perfect day from behind the arc by Joel Berry II (5-5) to beat the Blue Devils 90-83.

“I think our guys did a great job of just focusing in on the game today and not worrying about (how) if we lose, we’re still the ACC champs,” Berry said (NBCSports). “This gives us a little confidence going into the ACC Tournament, just like last year.”

A little confidence would be nice after the way things went the last time they took the court, a loss to the Virginia Cavaliers where they couldn’t buy a shot (and lost 53-43).

Duke didn’t make it easy on North Carolina. Luke Kennard scored 28 points, Frank Jackson scored 15, and Grayson Allen chipped in 14 off the bench. But Duke’s most significant contribution came from the free throw line where they made 28 of 35 attempts (North Carolina made 16 of 21).

Duke’s last lead came after a Frank Jackson layup made the score 65-63 with 10:58 to play. The Blue Devils were able to keep it close the rest of the way and even pulled within three, 86-83, after Luke Kennard made a free throw with 24 seconds to play. It ended up being the last point the Blue Devils would score.

Neither team ever got out to a large lead. By time the game was done, there were 24 lead changes and 14 ties.

“You saw a game where a lot of guys played well,” Duke coach Mike Krzyzewski said after the game. “And that’s it. Sometimes, it’s not nuclear science here. It’s that easy.”

The win locks up the top seed in the ACC Tournament and probably a No. 1 seed come March Madness time. That is, as long as they don’t lose early and Louisville doesn’t beat Duke, Notre Dame, and the Tar Heels en route to a conference tournament title. 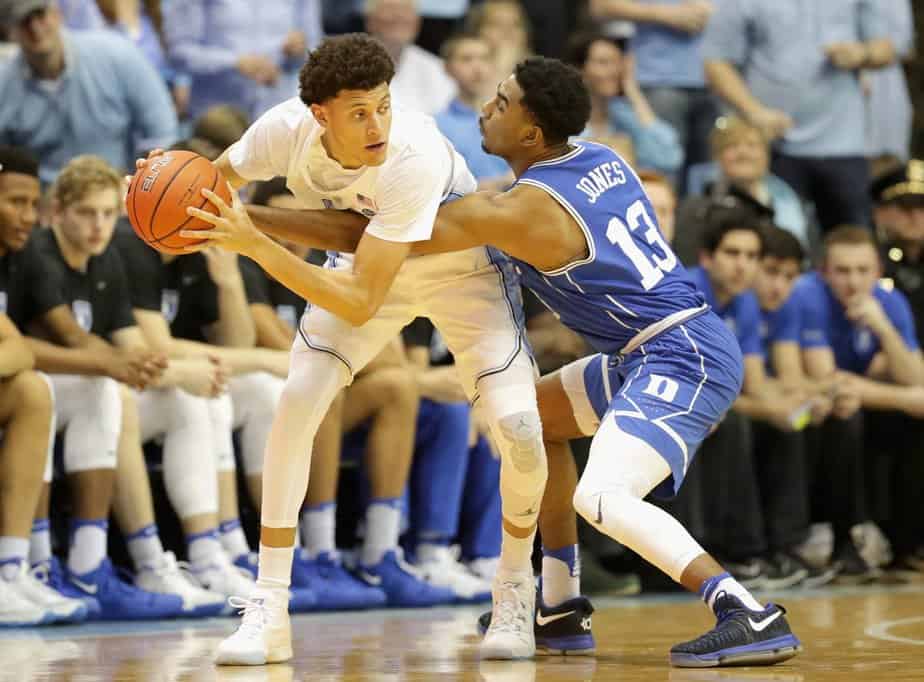 For Duke, the loss means the road to a conference tournament win is going to be a bit longer. Had they won, they could have been a No. 4 seed and skipped ahead in the tournament. Now they’ll have to win four games in four days against arguably the best competition in the country.

It might actually better for Duke to lose early in the ACC Tournament. Conference titles are not what a program like Duke plays for. They want national titles, and with the health issues they’ve had down the stretch a little break before the Madness kicks off might come in handy.