No. 20 USC-No. 4 Washington Preview: Time To Prove Yourselves, Huskies.

Fans of the Washington Huskies felt their team was shorted when it was overlooked for Texas A&M in the first CFB Committee Poll. But then the Aggies lost to Mississippi State, Washington demolished Cal, and when the new poll was announced, all was right in the Pacific Northwest. But it might have been better for them to have been jumped by Ohio State.

Had it happened, the chip on their collective shoulder would have become massive and would have helped propel them to victory over the final few weeks of the season. Instead, they are going to have to battle the ever-present threat of complacency as well as the competition. Should the Huskies come out with anything other than their best against USC Saturday night, the Trojans will happily kill what playoff dreams the Huskies have. 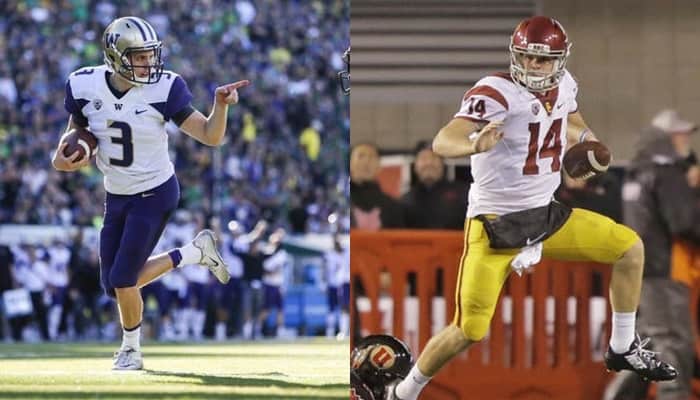 Four weeks into the 2016 season you the notion that the 1-3 Trojans could beat the 4-0 Huskies would have been called ludicrous. But since then, the Trojans have ripped off five wins in a row, four of which saw them score 40+ and win by 21 points or more.

Somehow, they figured out how to get their offense and defense on track and playing well.  After a disastrous month to start the season, the Trojans are going into the home stretch ranked No. 20 in the country.

A lot of the credit belongs to redshirt freshman quarterback, Sam Darnold. He named the starter for the Utah game and nearly led the team to victory. But the Utes rallied in the fourth quarter, scored 14 points to three for USC, and went on to win 31-27.

Since then he has led the team on a five-game winning streak, is ranked seventh in the nation in passer rating (first among freshman), completed 68 percent of his passes, and has a touchdown to interception ratio of five to one.

“He’s not really a freshman when you look at how many games he’s played now and the things he’s seen,” Petersen said.

It helps that he has a solid running game taking pressure off him and a pretty decent defense backing him (No. 38 in total yards allowed; 373.1 yards/game).

But that defense is going to have its hands full trying to contain Heisman Trophy candidate Jake Browning. With the help of an excellent pair of receivers in John Ross and Dante Pettis, Browning has the Washington pass offense ranked No. 31 in the nation and No. 1 in efficiency.

When they aren’t passing the ball, Myles Gaskin is pacing the running game with four 100+ yard games in his last five and 952 yards on the season.

USC can’t focus on the run or the pass since the Huskies can beat them with both, but the Trojans do have something going for them—they are going to make Washington earn whatever points they score. The Huskies are averaging 48 a game, but the Trojans are only allowing 23.

The Trojans will find it tough to slow down Browning and the Huskies offense, but nearly as tough as the time the USC offense is going to have scoring on the Washington defense (No. 18). Darnold is going to have a hard time passing on a unit that only gives up 181.9 yards/game. He is going to need his running back, Ronald Jones II, to have stellar games to take some pressure off the passing game and keep Washington’s offense off the field.

Washington as angry it was left out of the initial poll, but now they are in, and they have an opportunity to show they deserve to stay in the top four. If they bring anything less than their “A” game against a good Trojans team, USC will be more than happy to steal the win.