One of the goals the Michigan seniors likely had heading into this season was defeating Michigan State for the first time and take home the Paul Bunyan Trophy. The Wolverines last won it in 2012 and had only won it once in the last eight years. They were in a position to win it last season before an unfortunately botched punt allowed Michigan State to score the go-ahead touchdown.

They only had themselves to blame for letting the game stay close enough for a fluke play like that to happen; a mistake they were not going to make this season—and didn’t. While the score was relatively close, 32-23, Michigan as firmly in control throughout the game.

Michigan entered the game ranked No. 2 in the nation and the owners of the best overall defense in the nation—a fact that did not bode well for Michigan State and their 83rd ranked offense. The Wolverines had only allowed 25 points over the last four games and, per the oddsmakers, were favored by 26.5 points over the Spartans.

Michigan State got the ball to start the game, and with how the drive went, Michigan fans had to be a little nervous. The Spartans marched the ball downfield on a time-consuming, 12-play drive powered primarily by running backs LJ Scott’s 49 yards (who scored the touchdown on a five-yard run).

The drive was what they needed. For Michigan State to win they needed to keep the Michigan offense off the field by running the ball—something no one had been able to do—and they had to end drives with touchdowns. This was proof it was possible.

If only they had been able to keep it up.

Michigan answered with a touchdown of their own on a three-yard run by Jabrill Peppers, forced a turnover on downs on Michigan State’s next drive, took the lead for good with another touchdown drive, and then held Michigan State to just a field goal on their next.

Michigan State had to keep up with the Wolverines, but they never had a chance. Michigan would end up scoring on every possession they had in the first half to take a 27-10 lead into halftime.

The Spartans defense did their best to give the team a chance in the second half but didn’t get nearly enough help from the offense. Darian Hicks intercepted Wilton Speight on Michigan’s opening drive of the second half and ran it back to the Michigan 33. But the offense couldn’t convert after getting a first and goal on the two-yard line.

Michigan State still had a chance down 30-10 with most of the fourth quarter to go and appeared to be putting a much-needed drive together, but after 11-plays it stalled, and they had to settle for a field goal attempt—which they missed.

The Spartans would go on to score a couple of touchdowns in garbage time to make the score look much better than the game was.

But just in case the Spartans thought the score was indicative of how the game went, the Michigan defense forced a fumble on the conversion attempt, and Jabrill Peppers took it the distance for the final two points. 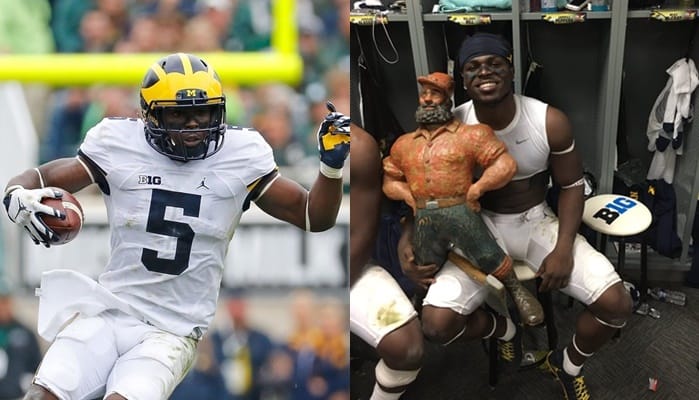 Michigan State gained the bulk of their 401 yards of offense on the ground against Michigan (217 yards; LJ Scott had 139 yards and a touchdown on 22 carries). Maryland, Iowa, Indiana, and Ohio State will likely be studying the film to see if they can duplicate whatever it is that made the Spartans run game so effective.

Barring a letdown against their next three opponents (Maryland, Iowa, and Indiana) the only thing standing in the way of Michigan’s playoff aspirations will be the Buckeyes. Michigan State will try to end the losing streak against Illinois next week.