No. 11 Florida Gators-Arkansas Razorbacks Recap: It Could Have Been Worse, Florida.

When the season started, there was a lot of hype and hope for the Arkansas Razorbacks and Florida Gators. After going 6-1 (including a bowl game over Kansas State) to end the 2015 season, many believed that the Razorbacks could make some noise this year. Florida came into the season with a fair amount of hope as the No. 25 team in the nation.

Heading into Saturday’s game against Arkansas, Florida had the inside track on a spot in the SEC Championship game—but Arkansas decided it was time for their first conference win of the season.

Many expected that defense would win the day for the victor—and it did. Just not the defense of the team that was expected to win (Florida). The No. 2 defense in the country couldn’t do much against the Arkansas offense (466 total yards; 243 passing, 223 rushing).

But the Florida offense did even less against the Razorbacks defense. Coming into the game, Arkansas had the No. 88 ranked defense in the country. They were allowing 221.8 yards on the ground every game (No. 109) and another 206 yards through the air (no. 37).

Florida should have felt good about their chances against the Arkansas defense, but things went wrong for the Gators offense from the start. Luke Del Rio through an interception on Florida’s first offensive play of the game, which Santos Ramirez was more than happy to take 24-yards for a touchdown and an early 7-0 lead.

Florida’s offense isn’t very strong in the first place (No. 75), but the Razorbacks defense made them look pedestrian holding them to just 241 total yards—and only 12 of that coming from the running game.

After being destroyed by Auburn’s run game two weeks ago (543 yards on 57 carries), Arkansas head coach Brett Bielema was very happy with his team’s play against the Gators:

“To come out of that game and realize we couldn’t stop the run, I just said, `I don’t care what we do, we’re going to stop the run on defense,” Bielema said. “I don’t care if we played with 11 guys or had to play with 12. I’ll take the penalty; we ain’t going to have someone run the ball on us.”

The team ended up racking up 223 yards on the ground. Austin Allen added another 243 yards through the air (one touchdown, one interception) to give Arkansas a 466-241 advantage in total yards. 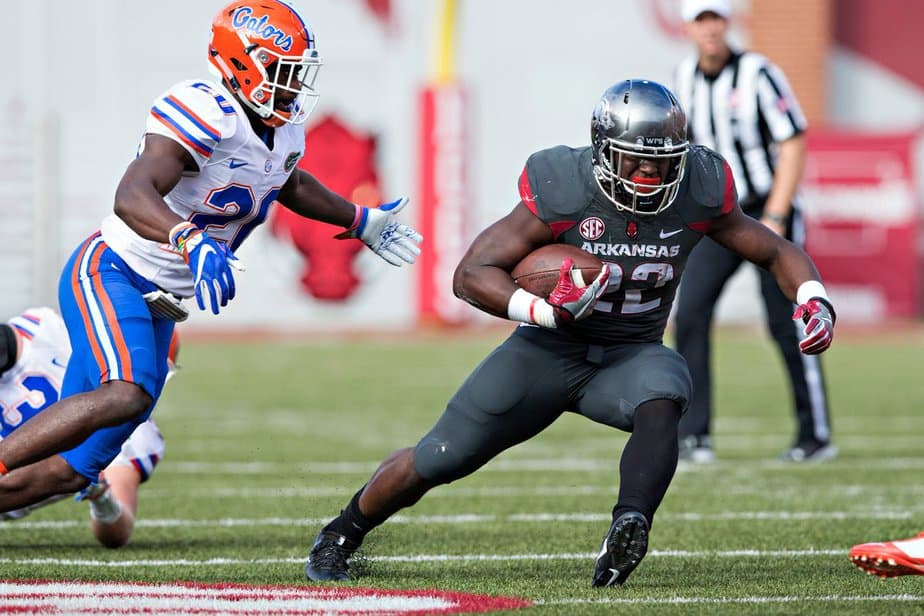 Arkansas last beat Florida in the Bluebonnet Bowl back in 1982. Since joining the SEC in 1992, Arkansas had lost nine in a row to the Gators. For the third time in four games, the Florida offense failed to generate more than 250 yards of total offense.

Between the lack of offense and the failures on defense, Florida head coach Jim McElwain felt the need to apologize to the fans:

“First and foremost for the guys who made the trip down here, I apologize you had to sit through that,” McElwain said. “… I feel horrible for Gator Nation and the way everything kind of played out.”

Thanks to Georgia kicking a 25-yard field goal as time expired to beat Kentucky, the Gators remain in control in the SEC East. They will try to get back on track next week against South Carolina. Arkansas has the unenviable task of facing LSU.