No. 10 West Virginia-Oklahoma State Recap—So Much For Those WVU Title Hopes

Going into Saturday’s game against the Oklahoma State Cowboys, West Virginia head coach Dana Holgorsen was in uncharted territory. For as long as he’s been the head coach, the Mountaineers had never been undefeated this late in the season. They were starting to be included in national title talks and are in a position to win the Big 12 for the first time.

At this point in the season, with each successive win, that kind of talk intensifies—or it goes completely away with a loss like the one they suffered at the hands of the Oklahoma State Cowboys, 20-37.

On paper, this is one that should have been an entertaining game (and it was), but one that the Mountaineers should have won. Both teams have talented quarterbacks, a good corps of wide receivers, and questionable defenses—but West Virginia’s (57th) was supposed to be better than Oklahoma State’s (103rd).

But the West Virginia defense had handled better offensive teams than Oklahoma State (like TCU and Texas Tech)—so what the heck happened here?

The defense did a decent job against Oklahoma State’s offense holding it to just 358 yards (273 passing, 85 rushing)—well short of the 480 yards they had been averaging a game. But on the offensive end, the passing game was not its usual prolific self. Howard had trouble going deep and ended up averaging just 5.4 yards an attempt (had been averaging 10.26 an attempt on the road).

In the end, Howard was 24-39 for 212 yards, a touchdown, and two interceptions; his first multi-interception game of the season). However, the running game was its usual productive self. Justin Crawford and Kennedy McKoy each had over 80 yards, and as a team, the Mountaineers had 209.

So the defense did an okay job, the offense was not great, but it wasn’t bad—so what the heck happened?

The one thing that can kill the best of teams no matter who they are playing—turnovers.

The Mountaineers were holding onto a 10-6 lead in the second quarter when a Skylar Howard fumble gave the Cowboys the ball on the West Virginia eight-yard line. Two plays later, Mason Rudolph threw his first touchdown pass of the day, a five-yard pass to Chris Lacy (Rudolph would have four touchdowns on the day, three passing and one rushing).

Late in the third quarter, down 20-10, Ramon Richards returned a Howard interception 59 yards to set the Cowboys offense up with first and goal on the West Virginia nine-yard line. Three plays later Mason Rudolph took it in himself from two yards out to stretch the lead out to 27-10.

With a little over four minutes left in the game and down by 14, Howard threw his second interception of the day. Oklahoma State’s Kevin Henry returned it 26-yards to set the Cowboys offense up at the West Virginia 10-yard line.

The ensuing field goal made the score 37-20 and made sure the Mountaineers couldn’t mount some kind of miracle comeback. 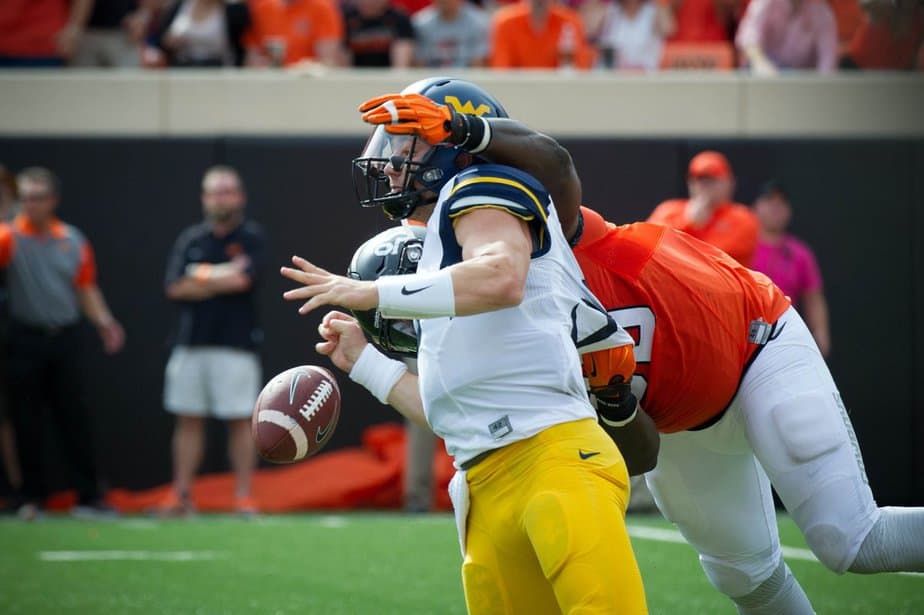 Oklahoma State’s win puts them back in the race for the Big 12 title, but it also puts Oklahoma firmly in control. However, the Sooners and their vulnerable defense end the season against three high-powered offenses (Baylor 11/12, WVU 11/19, and Oklahoma State on 12/3).