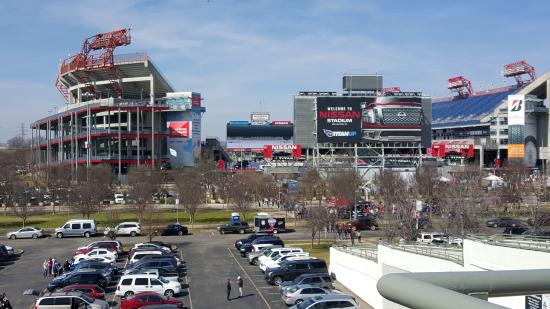 Nissan Stadium is a multi-purpose venue located in Nashville, Tennessee which serves as home to the NFL’s Tennessee Titans.

In addition to it being the home of the NFL’s Titans, it’s also the home field for the nearby Tennessee States University’s Tigers’ football team.

When the stadium first opened in 1999 it was named Adelphia Coliseum, until the name was changed to The Coliseum in 2002, and changed a again in 2006 till 2015 to the name LP Field.

It’s a natural Tifsport Bermuda Sod grass used as the playing surface, but due to weekly football games being played on it, and the hot climate in Tennessee, the field usually requires resodding at some point during the season.

During their time at Nissan Stadium, the Titans have recorded an impressive 45 wins and only 27 losses, while going 2-2 in the playoffs. That’s a solid performance dating back to their first season there in 1999.

• When Bud Adams originally began exploring moving his Houston Oilers to Tennessee in 1995 due to his dissatisfaction with his current lease at the Astrodome, Mayor Phil Bredesen and Adams agreed on a new stadium located on the east bank of the Cumberland River.

• The stadium received some renovations in 2012 when a new sound system was installed, LED ribbon boards, and high speed elevators to the upper and lower levels.

• The stadium flooded on May 3, 2010 when heavy downpours eventually led to the nearby Cumberland River flooding the area, and even in the locker rooms inside the stadium.

• Upon the field’s completing Adelphia Business Solutions stepped up to purchase the naming right for $30 million for 15 years. However they filed for bankruptcy in 2002 and released the naming rights, leaving the stadium simply called “The Coliseum” until 2006 when the naming rights were bought by Louisiana-Pacific changing the name to LP Field.

• It was named to Nissan Stadium when the car manufacturer bought the naming rights on June 24, 2015 which has a strong presence in the surrounding area as their North American headquarters in Franklin, Tennessee, just south of Nashville.