San Antonio Spurs fans should feel good about their team being up 2-0 on the Memphis Grizzlies in their first-round playoff series. Those that didn’t stay up and watch the whole game may look at the 14-point margin of victory and think it was another easy win.

While it was shaping up to be just that after the first half, the game ended up being anything but easy.

Memphis was able to get off to a fast start offensively in game one (30 points in the first quarter), but that was far from the case Monday night. Between missed shots and solid defensive play by the Spurs, the Grizzlies were only able to put up 16 points.

San Antonio, on the other hand, didn’t have near as much trouble and scored 29 in the first to take a commanding 13-point lead. The Spurs extended the lead to 25-points in the second quarter, but the Grizzlies were able to cut it down to a 19-point deficit by halftime.

The game appeared to be well on the way to getting out of control much like it did in Game One. But Mike Conley, Zach Randolph, and Marc Gasol found a rhythm that worked in the third quarter and managed to cut the gap down to four points, 75-71, early in the fourth.

But the Spurs were able to make a few key adjustments down the stretch. The defense stiffened up, and the offense began hitting a few more shots. The four-point lead was back to double-digits midway through the quarter.

It got as high as 15-points before settling at 14-points, 96-82, after Kawhi Leonard made the final shot of the game—a dunk—with 50 seconds on the clock.

With the win, the Spurs take a 2-0 lead in the series. Throughout franchise history, the team is 27-2 after winning the first two games of a series.

After the game, the story quickly became all about first-year Memphis head coach David Fizdale. He had an issue with how the game was officiated and made sure it was evident how he felt:

“We don’t get the respect that these guys deserve because Mike Conley doesn’t go crazy, he has class, and he just plays the game,” Fizdale said after the game.

The league doesn’t tend to look favorably upon such outbursts. His fine probably grew a few thousand dollars when he referred to the refs as unprofessional (ESPN):

“But I’m not going to let them treat us that way. I know (Spurs coach Gregg Popovich has) got pedigree and I’m a young rookie, but they are not going to rook us. That’s unacceptable, that was unprofessional. My guys dug in that game and earned the right to be in that game, and they did not even give us a chance.”

He went as far as to insinuate that the refs gave Kawhi Leaonard calls while not giving his any:

“Zach Randolph, the most rugged guy in the game, had zero free throws. But somehow, Kawhi Leonard had 19 free throws…” 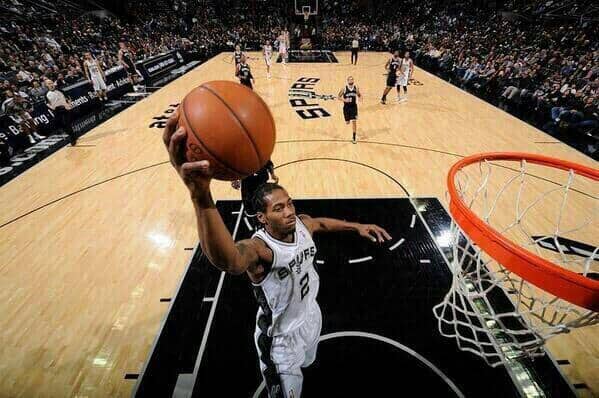 Fizdale went on to complain about the number of calls his team got in reference to their shots in the paint in comparison to San Antonio’s. While there was a pretty big discrepancy, what he fails to consider is that his guys simply can’t cover Leonard.

The only guy that has ever had much success doing so for the Spurs, Tony Allen, is on the bench with an injury.

If the Grizzlies are going to win one at home, they can’t let Kawhi Leonard score 37 points like he did Monday night—or maybe they just need to make a few more shots of their own. They’ve only scored 82 points in each game and have yet to shoot over 40 percent from the floor (39.2 and 37.8 respectively).

San Antonio, on the other hand, is shooting 45 percent or better.

The series moves to Memphis for Game Three Thursday night at 9:30 PM ET on TNT.