Aaron Rodgers has only missed the playoffs once since he became the starting quarterback of the Green Bay Packers (his first season as the starter in 2008). Since then, his season has ended in the Super Bowl once, Conference Championship once, Division Round three times, and Wild Card Round twice. With the way the team has looked the last couple weeks, Green Bay’s season is going to end on January 1 with the regular season finale against the Detroit Lions.

At 4-6, if they are going to have a chance they will need to do just what Aaron Rodgers told the press during the week leading up to Monday night’s game against the Philadelphia Eagles—run the table, a task the Eagles will certainly not make easy.

It has been a few years since the Eagles have been considered a perennial playoff team. Earlier this season there was a reason for hope after Carson Wentz led the team to a 3-0 start, but then they dropped five of their last seven. While a 5-5 record would put them in the thick of the division hunt in several divisions, they are in dead last in the NFC East.

A playoff berth would probably require them to run the table as well (along with getting some help from other teams).

Along with keeping their playoff hopes alive, the Packers would love to bring their losing streak to an end (four games). Philadelphia’s defense is one of the tougher ones in the NFL and will not make it easy on Rodgers to work his magic. But the offense, while far from perfect, has not been the bigger problem for the Packers.

That wouldn’t just make them the worst defense over the course of the season, but the worst in NFL history (current record—35.78 points/game by 1966 New York Giants).

Such ineptitude would be music to the ears of Eagles head coach Doug Pederson and his rookie quarterback, Carson Wentz. The Eagles offense has been one of the lowest scoring units in the league this season at 18.6 points/game and could use a game against a soft defense to help build some confidence—but there is help coming for the Packers defense in the form of defensive back Damarious Randall and linebacker Jake Ryan. 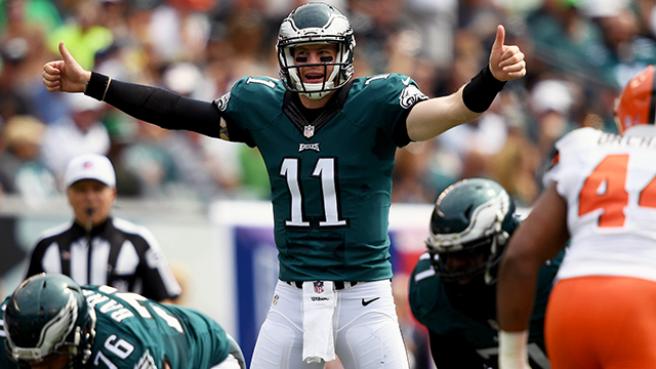 How much could those two players help? Randall was last season’s first round pick for the Packers and has been out since mid-October. Ryan’s return happens to coincide with current inside linebacker Blake Martinez being lost to a knee injury.

Is it possible that these two guys can make a big difference for the Packers defense? It’s possible when you consider the Eagles will likely be without running back Ryan Mathews and their receivers have had an issue with dropped balls this year (17; sixth worst in NFL).

But for the Packers to really have a chance, they need to put some pressure on Wentz. During the losing streak, the Packers have not recorded more than two sacks and five QB hits in a single game and have given up 11 total passing touchdowns in the span and 310 yards/game.

With the absence of a running guy in Green Bay this season, the Packers are not going to be able to run out the clock on anyone. Green Bay will need the defense to step up and make a few plays—something they haven’t really done all season. Otherwise, it will not be hard to imagine the Eagles rookie quarterback having a better night than Rodgers.