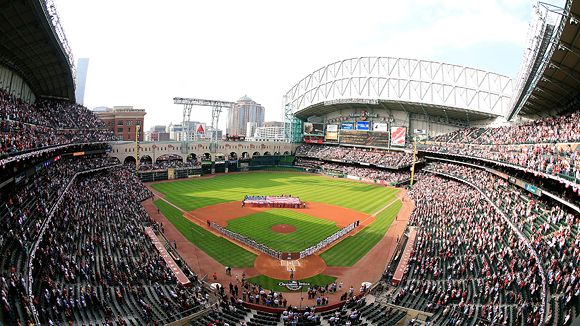 The park was originally named The Ballpark at Union Station and then changed to Enron Field, and again to Astros Field, before settling on its current name.

The stadium has a retractable roof attached, making it the first retractable-roof in a Houston sports venue.

The park has a train railway built into it and the train moves along the outfield wall whenever the Astros hit a home run or win a game.

• Ground was broken on the project on November 1, 1997 and completed for its opening on March 30, 2000 for an exhibition contest.

• Minute Maid, which is owned by Coco-Cola, purchased the naming rights to the stadium in 2002 for a price of $100 million over a 30 year contract term.

• The Union Station railway that the park is built around and themed after was opened on March 1, 1911 at a price of $1 million.

• A number of renovations have been made to the venue over the years including adding Wifi for fans in 2004 and a Daktronics HD screen in 2011.