The stakes are always high for “The Game,” as the rivalry between the Ohio State Buckeyes and Michigan Wolverines is known as. It has often directly impacted the Big Ten Conference Championship, but this season it was going to impact that and so much more. With the No. 2 and No. 3 teams in the CFB Playoff Committee Poll taking part, the loser would likely be out of the running.

With so much on the line, it is only right that the two teams turn in one of the best games of the year; one that required the final outcome be decided in overtime for the first time in the lengthy history of the game (first played in 1897).

For the first time since Urban Meyer took over at Ohio State, it appeared as if Michigan might beat the Buckeyes for a while. Michigan’s defense did a good job of limiting the Ohio State offense for much of the game. Except for their first possession of the game (a 10-play, 72-yard drive that ended with a missed field goal), the Buckeyes managed only three first downs in the first half.

Were it not for an interception returned for a touchdown by Malik Hooker, the Buckeyes would have gone into halftime facing a 10-0 deficit. Instead, despite their offensive struggles, Ohio State was only down by a field goal. They just needed to figure out how to get their offense moving.

What they didn’t need to do was make it easier for Michigan to score–which was what Urban Meyer did when he attempted a fake punt from the Ohio State 19-yard line–and failed. Michigan took advantage of the short field a few plays later and increased the lead to 17-7.

However, the Wolverines returned the favor with a Wilton Speight interception to set up the Buckeyes first offensive points of the game late in the third quarter and close the gap to 17-14.

The Michigan defense had played well, but with only a three-point advantage it wouldn’t take much for Ohio State to take control of the game—and they did. The Buckeyes defense shut down the Michigan offense in the fourth quarter, and the offense came alive. They needed to give Tyler Durbin two attempts to tie the game up at 17-17 and send it to overtime.

Both teams recorded touchdowns on their first drive in overtime, but Michigan could only manage a field goal in their second. It appeared as if the Michigan defense was going to hold Ohio State to a field goal attempt as well, but rather than put the game on his kicker’s foot, Meyer opted to go for the first down on fourth and one from the 16-yard line. 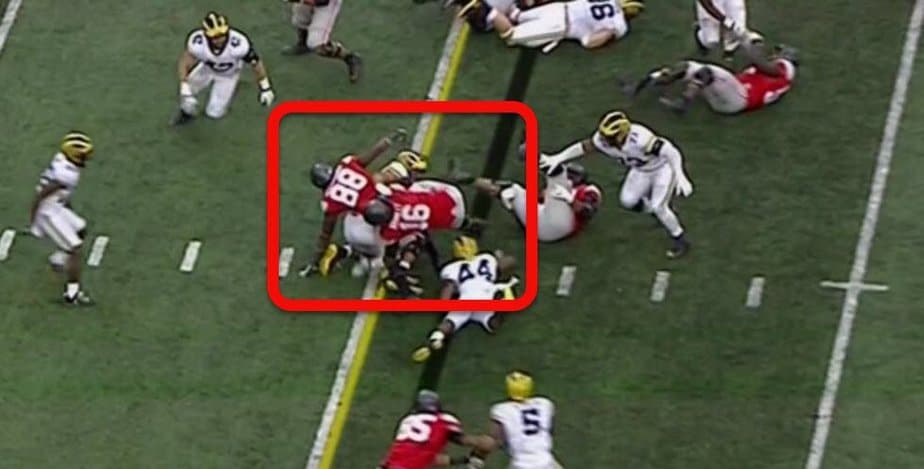 J.T. Barrett slammed into the back of one of his lineman at what appeared to be the 15-yard line—which would be enough for the first. The referees awarded the first down much to the chagrin of Michigan head coach Jim Harbaugh, and the call was confirmed after a review.

On the next play, Curtis Samuel trotted into the end zone to make the score 30-27, Ohio State.

It was the first time Ohio State had overcome a 10-point deficit to Michigan since 1987. The loss will likely knock the No. 3 Wolverines out of the playoff picture (without a lot of help).