Tournament time is not too far away. In just a few weeks, college basketball fans from all over the country will be filling out their brackets and hoping that they can predict the winners better than their friends. To better their odds, one of the many things fans will try to figure out is who this year’s Cinderella team will be.

Cinderella teams are lower seeded teams that may not always look too good but are capable of playing some very good basketball. They are not expected to make it far in the tournament, but overcome the odds and manage to do just that.

Fail to pick those teams, and your bracket becomes busted when they win. Choose them, and your shot at winning goes up exponentially.

So—who are this year’s Cinderella teams going to be? That is a very good question, but the Miami Hurricanes are starting to look like a very good candidate.

CBSSports and USAToday have the Hurricanes listed as a team that is on the bubble watch but is in for now. Heading into Monday’s game against No. 18 Virginia, they had just two wins against teams in the RPI top 50. But they were very good wins; one came over North Carolina (currently projected to be a No. 1 seed) and Virginia Tech.

As nice as the wins are, however, the committee will not be able to ignore the losses (five in the RPI top 50). So, they have proven that they can play very good basketball; you have to beat North Carolina. But they are also capable of laying an egg if they fail to play up to their competition.

Should they make it in and play up to their ability, they could definitely wreck a few brackets. So with the regular season winding down, if the Hurricanes want to make sure they get a dance card, they need to make another signature win or two—which they got Monday night against Virginia.

Virginia didn’t have a bad game on defense. Whenever you can hold a team to just 43 points in regulation play, you have to be doing something right. However, combine Miami’s defensive effort with their own terrible shooting woes, and the stage was set for the No. 18 team in the nation to lose their fourth in a row and sixth of their last eight.

Miami didn’t exactly have a great night from the floor (15-41; 4-19 from three-point range), but Virginia continued their recent trend and had a pretty bad one as well (16-51; 3-12 from three-point range). The Hurricanes thought they won the game during regulation with a late three-pointer by Davon Reed, but the basket was waived off upon review.

The game went to overtime with the two teams tied at 43. Bruce Bowen made the only basket from the floor for the Hurricanes in overtime, but they also made eight free throws while holding Virginia to just a pair of baskets. 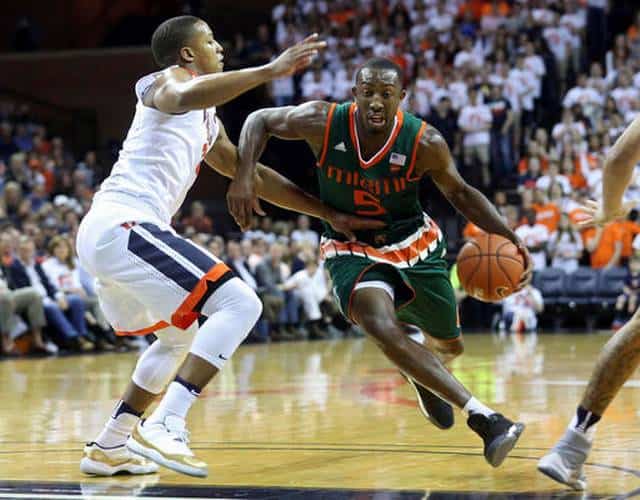 Miami didn’t have the best night from the floor, but they found a way to score enough on the No. 1 defense in the nation to win. However, to make sure they make the tournament, they will likely need to bring Duke’s winning streak to an end this Saturday or take down Florida State to end the regular season. But if they lose to Virginia Tech, they may need to beat both.

Assuming they can do what it takes to get in, whoever they play better not take them lightly.