Home
Basketball
March Madness Recap--Day One: The Craziness Has Only Just Begun

March Madness Recap–Day One: The Craziness Has Only Just Begun

If guys take the commercials being played on radio seriously, there could have been a lot of guys sitting on their couches all day Thursday watching the opening day action of March Madness as they recovered from their vasectomies. It would have been a lot easier just to take the day off from work, but then they might be expected to get up and do stuff with their significant others or kids.

This way, they have the perfect excuse for needing to sit down all day long. Since they are doing so, they might as well watch all the latest and greatest March Madness action!

Like most opening days, there were a few upsets, a few blowouts, a bone-headed moment or two, and quite a few good, close, hard-fought games. In a nutshell, here is how Day One of the 2017 NCAA Tournament transpired:

A No. 1 seed has never lost in the modern day version of the NCAA Men’s Tournament. After leading Villanova for most of the first half, there were probably a few fans that thought Mount Saint Mary’s could be the first No. 16 seed to pull it off. But then they played the second half.

After getting warmed up in the first half, the Wildcats looked more like what a No. 1 seed should. They led by one at the half but then outscored Mount St. Mary’s by 19 in the second.

One of the better match-ups on the first day of the Tournament is often the No. 8-No. 9 seed game, and Wisconsin and Virginia Tech didn’t disappoint. The Badgers led by four at the half but were not able to pull away from the Hokies in the second.

Virginia Tech kept it close throughout the final 20 minutes of the game but was not able to take the lead. The Badgers will face Villanova in the next round.

No. 12 seeds are notorious for upsets in the first round. With some of the struggles Virginia had during the regular season, it wasn’t hard to imagine them getting upset by UNC Wilmington. After one half f play, it looked like a definite possibility with the Cavaliers clinging to a one-point lead.

The game remained close in the second half, but then, with the score tied at 42-42, the Cavaliers went on a 19-9 run to take a 10-point lead. UNC Wilmington managed to close the gap but couldn’t overcome it.

With Florida losing two of three to end the regular season and then losing early in the SEC Tournament to Vanderbilt, they were many who thought they could be upset by a red-hot East Tennessee State team. When Florida only led by a point at the half, Gator Nation had a reason for concern.

But then the second half started, and that concern went away. Florida slowly began to pull away as the second half went on. Devin Robinson ended the night with more made shots than the rest of the starting five (ten to nine), scoring 24 points in the process. 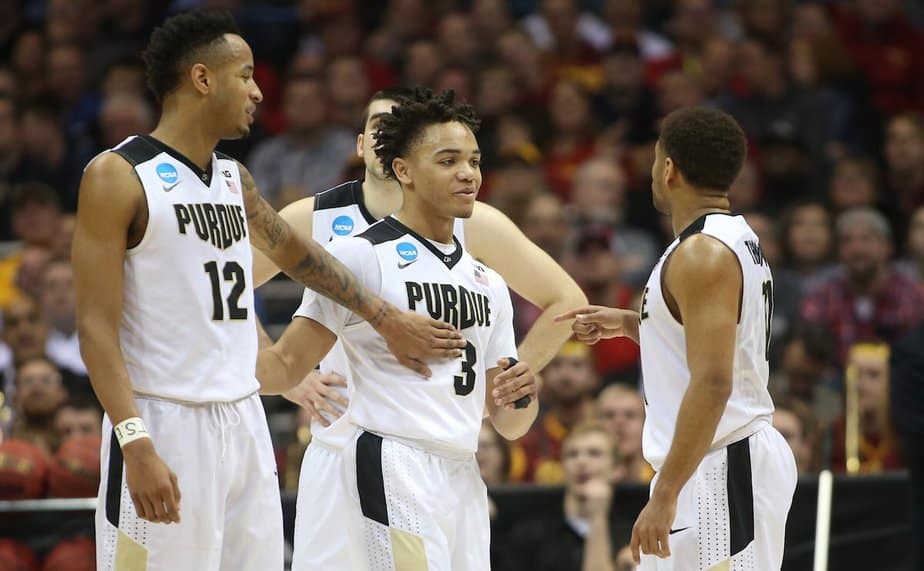 No. 12 seeds are infamous for upsetting No. 5 teams, but that wasn’t even a worry in this one. The Cyclones had a comfortable 13-point lead at the end of the first half. Nevada tried to make it interesting in the second half by outscoring the Cyclones, 46-44, but it wasn’t close to enough.

Iowa State will have to bring a better game if they want to beat Purdue in the next round.

Purdue went down in the first-round last year in what was one of the bigger upsets of the tournament. This year, they were bound and determined not to let it happen again. The Boilermakers only led by a point at the end of the first half.

The Boilermakers padded the lead early in the second half but were not able to pull away until late in the game thanks to 15-second half points from Vincent Edwards and some clutch plays by Caleb Swanigan. 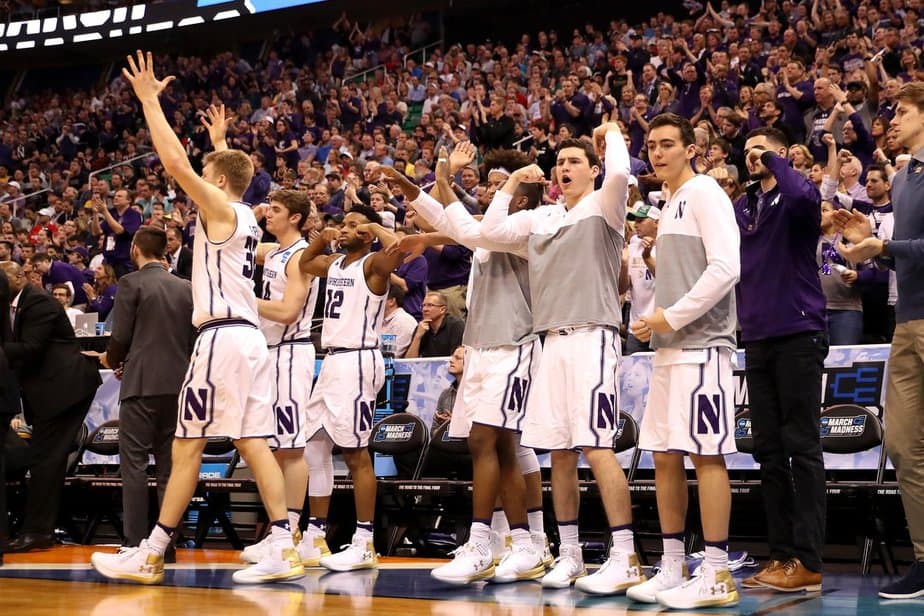 There seemed to be a common theme in many games Thursday. Heavy favorites—like Gonzaga—struggled against their opponents—in this case, South Dakota State. They held a small lead at the end of the first half, but then exploded to take a commanding one in the second.

Gonzaga led by only four at the end of the first half but took over in the second half to win big.

Northwestern was playing in their first NCAA tournament game and hoped to get their first win too. They did but not because they played the better game. They got a huge assist from Vanderbilt’s Mathew Davis-Fisher.

After a layup by Riley LaChance had given the Commodores a one-point lead with 17 seconds left, Davis-Fisher fouled Bryant McIntosh who went on to make both free throws and take the lead.

“I actually thought we were down one,” Fisher-Davis explained after the game (ESPN). “Coach … pointed at him, but he was just telling me that was my matchup. I took it as (I should) foul.”

The Fighting Irish nearly became the first upset of the tournament. With 11 seconds to play, Matt Farrell missed the front end of a one-and-one. That gave Princeton’s Devin Cannady a chance to win the game with a late three-pointer—but he missed.

Notre Dame will have a tougher challenge up next when they face West Virginia.

West Virginia was able to get out to double-digit leads in the first and second half of their first-round game against Bucknell, but the Mountaineers press defense couldn’t keep the Bisons from making a charge and closing the gap. But they were only able to get as close as five points in the second half

While they may not have played well overall, the Mountaineers are happy not have been upset early for the second consecutive year. They were a 3-seed last year when they were upset by Stephen F. Austin in the opening round.

Maryland’s youth helped the Terps take a 36-35 lead into halftime and stretch the lead out to six points early in the second. But Xavier was not going to be denied. After falling behind by six, they went on a 23-6 run to take the lead and create a nice 11-point cushion.

Maryland got within six points late in the game, but never really threatened to retake the lead.

Dunk City, otherwise known as Florida Gulf Coast, was a popular choice to pull off an early upset. But the Seminoles had another ending in mind. They led by four at the half and stretched the lead out to double digits several times in the second half but couldn’t maintain the lead.

Sloppy play late in the game nearly cost Florida State. Up by 10 points with about a minute and a half to play, the Seminoles let FGCU get within five with 36 seconds to play. They will not be able to get away with slacking off in the final minutes of the game against Xavier in the next round.

Saint Mary’s looked like they were going to run away with it after smoking the Rams in the first half, 46-31. But the Rams did what they could to make it interesting in the second half. A 23-10 run to start the second half closed the gap to two, 56-54.

But the Gael’s outscored the Rams 29-23 the rest of the way to secure the win.

On occasion, a No. 15 seed has beaten a No. 2 seed. It doesn’t happen often, but it has happened—but there was never a chance of it happening here. Arizona led by 16 after the first half, 53-37. They took their foot off the gas a little in the second half but did enough to become the first team to score 100 in the Tournament.

They will face Saint Mary’s in the next round.

As a No. 15 seed last year, Middle Tennessee upset Michigan State. If they were going to advance this season, they would have to upset another Big Ten team in Minnesota. After winning the Conference USA tournament many expected them to pull off the upset again—and they did.

Middle Tennessee led by six at the end of the first half and by double digits for most of the second half. They’ll face a tough Butler team in the next round.

The Winthrop Eagles would have loved to have busted the brackets of thousands of college basketball fans with an upset win over a team that gained national notoriety by doing the very same thing—but it just wasn’t meant to be.

Avery Woodson scored a career-high 18 points off six three-pointers, and the Bulter defense frustrated the Eagles enough to take a 41-27 lead into the first half break. Winthrop made a better game of it in the second half but never got close to taking control of the game.