Florida needed a win more than LSU when the two SEC powerhouses met Saturday afternoon. But that doesn’t mean LSU wanted to win any less than Florida did. The Tigers wouldn’t be playing for the SEC Championship, win or lose, but a loss could bring an end to Florida’s chances.

When it’s a game between rivals, there doesn’t need to be anything on the line for the players to get pumped up for it. Both sides were so pumped for the 63rd meeting between the two teams that a scuffle broke out at midfield during warmups. 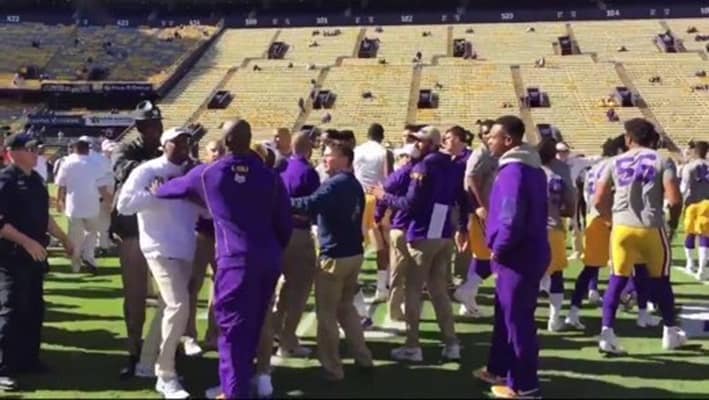 It began as an altercation between freshmen cornerbacks Chauncey Gardner (Florida) and Saivion Smith (LSU) but ended up involving several players and even one coach before members of both staffs, and the police broke it up.

The scuffle will get as much air time during highlight shows as the actual highlights of the game because of who was among the many involved—LSU running back Leonard Fournette and Florida defensive backs coach Torrian Gray. Fournette, who was in sweats because he was not expected to play before the scuffle breaking out, can be seen shoving Gray twice, but it is hard to see in the video if Gray provoked Fournette in any way.

Rumor has it that following the incident Fournette told LSU Head Coach Ed Orgeron that he wanted to play:

“He didn’t say [it was because of the fight] to me,” Orgeron said. “He just came to me before the game in the dressing room and said, ‘Coach I want to play.'”

With their next game less than a week away, Orgeron would have been smart to tell his star running back “no”—but he didn’t. Not playing and having more time to heal would have been the smarter choice, but Fournette played—and not well. He had just 12 carries on the day for only 40 yards.

LSU outgained Florida on the day, 423 yards to 270 yards, but mistakes and the Florida defense kept them from putting many points on the board. The Tigers had a chance to extend their lead midway through the second quarter, but Derrius Guice fumbled the ball inside the red zone (Florida recovered). They had another chance to extend the lead on the opening drive of the second half, but a botched hold resulted in a turnover on downs.

On the next play, Austin Appleby connected with Tyrie Cleveland on a 98-yard pass and run to give Florida a 10-7 lead. 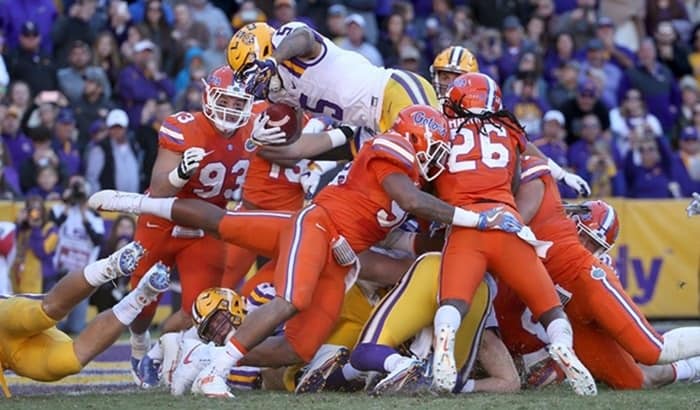 LSU tied the game up at 10-10 early in the fourth quarter only to see Florida retake the lead with a kick of their own on the next drive.  Florida got a chance to ice the game when LSU fumbled the ensuing kickoff, but the LSU defense held forcing them to settle for a field goal and a 16-10 lead.

The Tigers were far from down, and managed to get the ball to the one-yard line with 10 seconds to play—but once again, the Florida defense stepped up to the challenge and denied the Tigers on two attempts to preserve the win.

“We had a little short toss called, and the back went the wrong way, although he made a good effort,” Orgeron said after the game. “But it just wasn’t executed right.”

With the win, Florida earns a return trip to the SEC Championship game to take on Alabama. LSU faces off against Texas A&M Thanksgiving night. Just like last season, a win for LSU could be what secures the head coach’s job. However, after playing on his injured ankle today, Fournette’s availability is in doubt.

It will be interesting to see if the SEC decides to punish him for shoving Florida’s defensive backs coach, Torrian Gray, during the pregame scuffle.