Baylor really needed a win Saturday against Kansas. Not so much because they wanted to keep their very slim Big 12 title hopes open but because the team could use the kind of confidence boost that comes with beating the No. 3 team in the nation. They entered the game having lost three of their last five—including a five-point loss to Kansas. Yeah, a little revenge would be nice too, but getting on track and playing better basketball would be more important.

Overall, they played pretty good basketball—except for the last three and a half minutes.

Baylor led by as much as ten during the first half as their defense got the job done against the Kansas offense. But the Jayhawks were able to close the gap to six points by the end of the first half. Kansas kept the pressure on Baylor in the second half and were finally able to erase the deficit when Lagerald Vick made a layup with 11:28 to play.

They even took a brief lead for a couple of minutes, but then Baylor regained control of the game. King McClure gave the Bears a six-point lead with 3:34 to play. But being down late in the game was nothing new to the Jayhawks. They were fresh off overcoming a 14-point deficit in the final three minutes of Monday’s game against West Virginia.

So, overcoming a six-point deficit would be nothing—right?

“We were down by more than that last game,” Kansas star Frank Mason III said during a post-game interview. “We just showed toughness and leadership as far as the older guys, and I think the younger guys did a great job of following.”

Well—it wasn’t. The Jayhawks finished the game on an 8-0 run that was capped off by a pair of Landen Lucas free throws with 12 seconds left to take the lead.

“I actually was very confident. I thought he’d make them. I did,” Jayhawks head coach Bill Self said after the game. “I think he was confident too. … I’m not even sure they were close early, but these were pure, and I don’t think there was much doubt.”

Manu Lecomte had a shot at a game-tying jumper but missed.

Frank Mason led the way for Kansas with 23 points and eight assists followed by Josh Jackson with 16 points. Jonathan Motley led all scorers for the Bears with 19 points followed by Manu Lecomte’s 16-point day and Jo Lual-Acuil Jr’s 11-points. 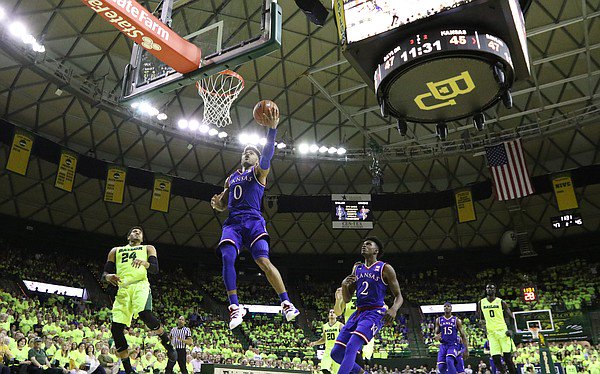 The win didn’t quite lock up a 13th Big 12 title for the Jayhawks but has made it practically inevitable. With four games to play, they have a three-game lead on Baylor, West Virginia, and Iowa State.  However, the win does mark the fourth time this season the Jayhawks have defeated a top five team (No. 4 Kentucky, No. 1 Duke, No. 2 Baylor, and now No. 4 Baylor as well).

Kansas will not take the court again until Wednesday when they face TCU at home. Baylor will look to get back on the right side of the scoreboard on Tuesday against Oklahoma.