Home
Basketball
Houston-Milwaukee Recap: Rockets Back On The Right Side Of The Scoreboard With Win Over Bucks

Houston-Milwaukee Recap: Rockets Back On The Right Side Of The Scoreboard With Win Over Bucks

After ending their first losing streak of the season at two games Sunday night with a dominant win over the Brooklyn Nets, the Rockets probably expected to start their next winning streak with a big game over one of the worst teams in the NBA Tuesday night, the Miami Heat. But the Heat pulled out a surprising 109-103 win over Houston.

The loss left the Rockets looking to get back on the right side of the scoreboard Wednesday night when they took on the Milwaukee Bucks.

Milwaukee was hoping to get back on the right side of the scoreboard themselves having lost their last two, but it just wasn’t meant to be for them. James Harden led the way for the Rockets with 38 points, eight assists, and six rebounds as Houston won convincingly, 111-92.

The Bucks got out to a 27-22 lead after the first quarter, but the Rockets offense woke up, and the defense clamped down in the second. Powered by an 18-0 run in the second quarter and good defense, Houston was able to take a 52-39 lead into halftime.

While the offense woke up, the name of the game was really the defense. Milwaukee’s 39 points is a new season-low first half total for the Rockets defense. Houston held the Bucks to 39.8 percent shooting from the floor and blocked 12 shots (season-high).

”That was the key to the game,” Harden said following the game. ”I think we’re realizing that in order for us to get to where we want to go, we have to get stops. When we get stops, we are 10 times better.”

The Bucks got within five in the third quarter, but Houston was able to stretch the lead back out to 14, 79-65, heading into the final quarter. A Tony Snell three-pointer got the Bucks within seven about midway through the final period, but four straight three-pointers by the Rockets (one by Trevor Ariza, two by James Harden, and one by Eric Gordon) stretched the gap out to 19 points, 98-79.

Houston was just 4-20 from behind the arc in the first half but finished the game making 14 of 44 three-pointers. Eric Gordon chipped in the most with seven (7-17), and James Harden had four (4-11).

After the game, Antetokounmpo referred to Harden as the best player in the league:

”He’s tough to guard, and the guys around him makes him even tougher to guard,” he said. ”He’s doing a great job of finding his teammates and being unselfish.” 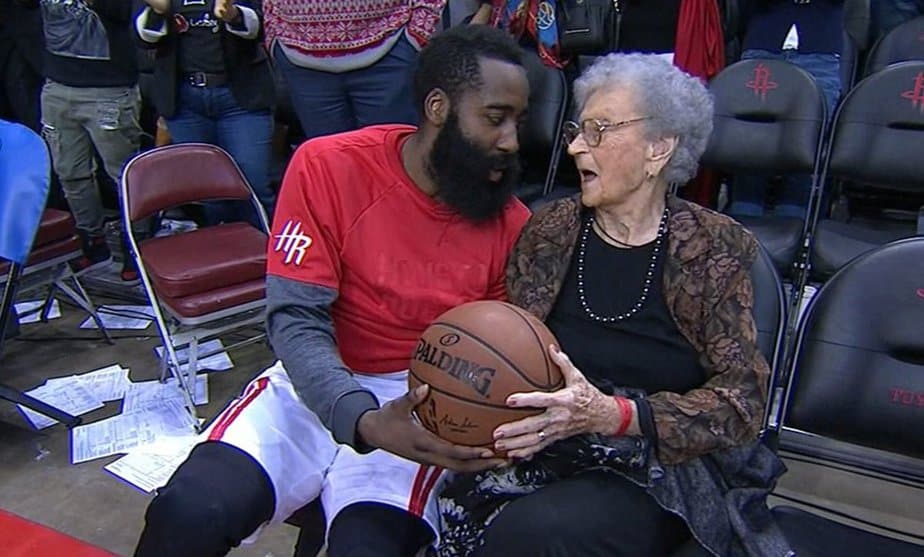 Harden’s best play of the night came after the game ended. A fan sitting courtside was celebrating her 100th birthday. After the game had ended he signed the game ball, sat next to the woman, chatted with her for a few moments and handed her the ball (FTW).

“Today is her 100th birthday. It’s a blessing. She’s excited. She’s sitting on the court. She’s just smiling over there. I had to go give her the game ball and go tell her how blessed she is and how blessed I am for meeting her.”

Harden will get a chance to prove him right the next time the Rockets take the court—Friday night against the Golden State Warriors at home. Houston already played the Warriors once this season, a 132-127 double overtime marathon (and win) on Golden State’s home court December 1.