College basketball certainly didn’t. Nine of the top ten teams in the country saw action Saturday. Before the action began, it is probably safe to say all nine were expected to win—but they didn’t. In fact, so many top ten teams lost on Saturday that the day became historic.

Six—yes, six—of the top ten teams in the game went down (tied for most in one day in AP Poll history).

The No. 1 team survived (90-55 over Santa Clara), but Gonzaga has a pretty soft schedule and will not face a serious competitor until the Sweet 16. No. 4 Villanova took down St. John’s, 92-79. No. 6 Louisville didn’t have much trouble with Boston College, 90-67. But the good times ended there.

No. 2 Baylor-Kansas State: The Bears nearly overcame a horrible performance in the first half that saw them behind by 15 points, 37-22, at the break. A valiant effort on both ends of the court allowed them to slowly close the gap to one point, 55-54, when Manu Lecomte hit a three-pointer with 42 seconds left.

But that was the last shot they made. K-State tacked on a pair of free throws to make the final 56-54. It was Baylor’s first loss at home this season.

No. 3 Kansas-Iowa State: After beating No. 4 Kentucky and taking down No. 2 Baylor, it was beginning to look like the road to the Big 12 Championship was going to go through Kansas—unless it doesn’t. The Jayhawks looked like they were going to make it 52 consecutive home wins after getting out to a 52-38 halftime lead.

In the end, Kansas didn’t have an answer for the 18 three-pointers the Cyclones made (a new school record). Iowa State outscored Kansas 10-7 in overtime to secure the upset win, 92-89, and end Kansas’s home win streak at 51 games.

No. 5 Arizona-No. 13 Oregon: The Ducks had been struggling their last couple time on the court (loss to Colorado, a 1-point win over Arizona State), but against the Wildcats the struggle was—well, there was no struggle for the Ducks. The team hit ten of 14 three-pointers in the first half to take a 38-18 lead and a record 16 (most ever on their home court) overall in a surprisingly easy win over Arizona, 85-58. 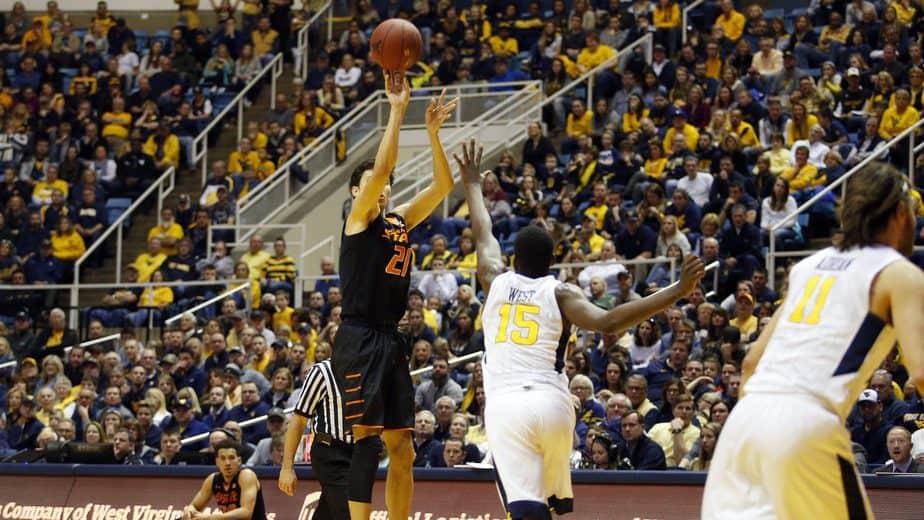 No. 7 West Virginia-Oklahoma State: The Mountaineers seem to do well, as long as they are playing one of the best teams in the country. They beat then-No. 1 Baylor a couple of weeks ago, and more recently took down then-No. 2 Kansas. But when they play the lesser teams they seem to struggle. Oklahoma State shouldn’t have given them such a good fight—but they did.

The Mountaineers held a slim 44-40 lead at halftime, but couldn’t hold onto it in the second and ended up losing 82-75.

No. 8 Kentucky-No. 24 Florida: The Gators came into the game on a roll with 30+ point wins in their last three games but none of those opponents were anywhere near the competitive level of Kentucky—but you wouldn’t have known that by how the game went. 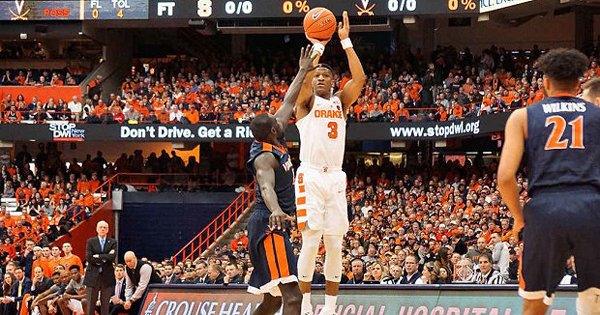 No. 9 Virginia-Syracuse: The Cavaliers probably felt pretty good about their chances when they took a 34-22 lead into halftime against the Orange. But they forgot one very important thing—playing well in the second half. Syracuse needed a few minutes in the second half to erase the deficit and take the lead, 39-36 when Tyler Lydon hit a three-pointer with 11:58 to play. It didn’t hurt that the Orange shot 74 percent from the floor in the second half either.

The game would remain close the rest of the way, but Virginia was never able to retake the lead. The win unofficially gave longtime Syracuse head coach Jim Boeheim win No. 1000, but since 101 wins had been stripped as part of a NCAA punishment the number stands at No. 899 instead.