Florida State-Georgia Tech Recap: When You Can’t Hit A Shot To Save Your Life, Bad Things Happen

A team like Florida State should not have any trouble playing a squad like the one Georgia Tech is putting on the court these days. Not that the Yellow Jackets are bad; the Seminoles are just better. But just like in football where any team can win on any given game day, the same can happen in basketball.

This concept is especially true if one team has an incredibly bad shooting night—like the one Florida State had Wednesday night against the Georgia Tech Yellow Jackets.

The Seminoles have been one of the more accurate teams in the nation this season (No. 8; 49.8 percent), but even the best shooters have an off night from time to time—and Florida State was certainly off against Georgia Tech.

Florida State managed just 15 points in the first half to Georgia Tech’s 41. While things improved in the second half (41 points), they couldn’t overcome the 26-point hole they had dug for themselves. Georgia Tech won easily, 78-56.

“We couldn’t make anything to save our lives,” FSU guard Xavier Rathan-Mayes, who was 2-8 from the floor and scored just 5 points, said after the game. “Nothing would go in for us from layups to dunks to free throws.”

Dwayne Bacon, one of the ACC’s top scorers this season was only 4-15 from the floor and 3-7 from three-point range for 12 points. He was the only Florida State player to score in double-figures.

No matter how bad one team plays, if the other doesn’t play better, they can still win—but Georgia Tech played well. Freshman guard Josh Okogie had the first double-double of his young career with 35 points and 14 rebounds, both career highs.

“We had tremendous energy, and then I don’t think they had the energy to match us,” Okogie said. “We were just feeding off that.”

Georgia Tech hasn’t been back to the NCAA Tournament since 2010 (lost in second round) and hasn’t had a winning conference record since the 2003-04 season (9-7). With the win over Florida State, they improve to 12-8 overall and 4-4 in conference play. 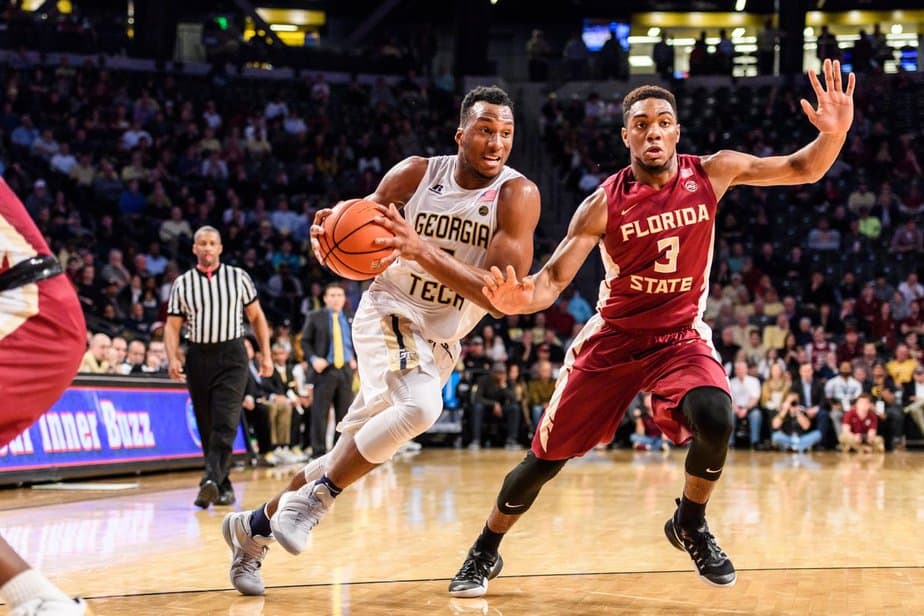 They had lost their last three games against ranked opponents, but have now beaten a top-10 at home twice this season. They’ll have another tough home game Saturday afternoon against No. 14 Notre Dame coming to town.

Florida State will try to get back on the right side of the scoreboard when they travel to upstate New York Saturday afternoon to take on Syracuse.