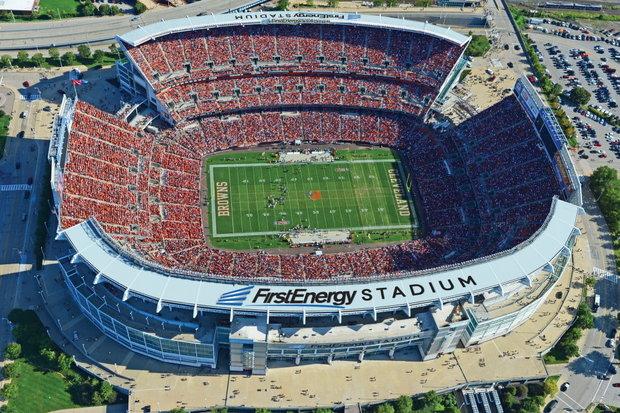 FirstEnergy Stadium is a multi-purpose venue located in Cleveland, Ohio, and is home of the NFL’s Cleveland Browns. Originally named Cleveland Browns Stadium and did not intend to sell the naming rights to the stadium, which is very unique for professional sports stadiums. However, after the sale of the team to Jimmy Haslam, the CEO of truck stop chain Pilot Flying J, the naming rights to the stadium were sold to FirstEnergy Corporation in 2013.

Unlike most major sports stadiums, the venue does not have its own public parking lots. However, there are a number of lots in the surrounding areas which are used, as well as the Waterfront light rail line which arrives at the stadium and is a popular choice for attending games, which helps circumvent some of the potential parking problems.

In addition to being the home of the Cleveland Browns, it’s also been the host of the Ohio Classic Football game which was held there in 2004 and 2005. It’s also been the site of a number of other college football games such as the Bowling Green Falcons vs Wisconsin Badgers game in September of 2006.

It’s not the home of the annual Patriot Bowl since 2007, and has featured a number of Ohio teams such as Akron and Kent State in recent years.

Since 2011, the stadium has been commonly referred to as the “Factory of Sadness” by some of the local Cleveland residents. The term was first coined by Browns fan, and comedian, Mike Polk, as a reference to the teams ability to disappoint their fans.

It’s still the only NFL venue that hasn’t hosted a postseason game of any kind. The Browns are one of four teams in the NFL to have never hosted an NFL playoff game in their home stadium, with the other three being the San Francisco 49ers, the Detroit Lions, and the New York Jets. However, those three teams have had Super Bowls hosted at their stadiums, which makes FirstEnergy Stadium the only NFL stadium without a playoff game ever being played there.

• Ground was broken on the project on May 15, 1997 and the stadium was opened two years later in July of 1999 with a preseason NFL game between the Browns and the Minnesota Vikings.

• In 2006 it was the site of an international soccer match between the United States and Venezuela in the matches leading up to the 2006 FIFA World Cup.

• In 2009, the stadium played host to a college football game between two Ohio teams, the Ohio State Buckeyes and the Toledo Rockets. Though the location is geographically closer to Toledo and was considered to be a home game for the Rockets, the 71,727 fans in attendance were mostly Ohio State fans.