It was a heck of a game Monday night and one that Alabama fans, players, and coaches will have to live with until next season. Could they have won if Bo Scarbrough didn’t go down with a broken leg? Did they abandon the run too soon after Scarbrough’s injury? Were they really not the better team?

Vegas was really hoping Alabama would be the better team. According to reported estimates, between $15-20 million was wagered on the game in Nevada—much of it on Clemson.

After the way Clemson manhandled Ohio State, and with Alabama changing offensive coordinators the week before the game, a lot of people were willing to put money down on the Tigers. If Clemson won and the two teams combined for more than 51 points, it was going to be a bad game for the sportsbooks—and it was.

Many sportsbooks lost big. Many have admitted to low six-figure to seven-figure losses (ESPN).

Whether Scarbrough or Kiffin could have made a difference will never be known, and as far as the world and the scoreboard are concerned, Alabama was not the better team. But as far as Vegas is concerned they will be the better team once again.

The confetti had yet to be cleaned off the field before odds on next year’s title winner were released. Even though Alabama is losing four starters on offense and five on defense, the odds the Crimson Tide are winning it all next season are 3-1. For most schools, needing to replace so many starters would have resulted in higher odds, but no one can reload quite like Alabama does.

Clemson, who will have almost an entirely different identity on offense next season due to all the departures, opens with 18-1 odds. The odds on some of the other notable teams, according to the Westgate Las Vegas Super Book are (ESPN): Florida State 7-1; Oklahoma, Ohio State, USC 8-1; Louisville, Michigan, LSU 12-1, Texas 25-1, Oklahoma State, Penn State, Auburn 30-1; Washington 40-1. 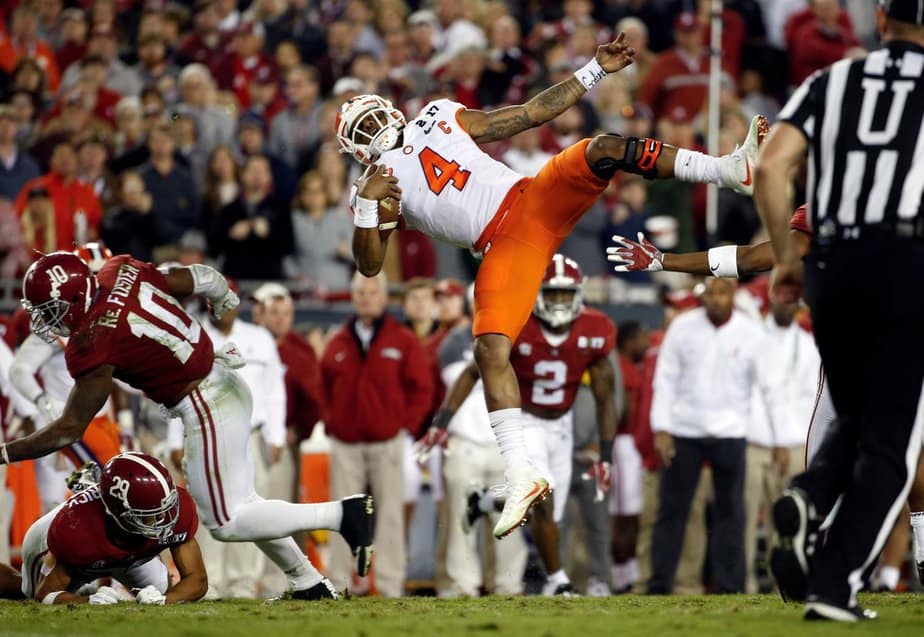 So—who will win it all next year? Well, like all the way-too-early polls that came out after the game led with—it is way too early to tell. But with Alabama winning four of the last eight national titles and the Crimson Tide having the top recruiting class in each of the last six years (according to 247sports), it is not hard to imagine Alabama replacing their lost talent with even better players.

At least we will not have to wait long to see what the two teams with the best odds will have to offer. Alabama opens the season against Florida State at the Mercedes-Benz Stadium in Atlanta next season.