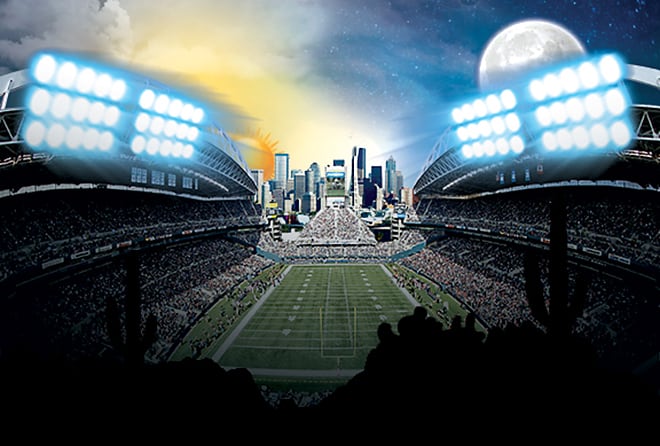 The multi-purpose facility standing in Seattle, Washington and home of the Nation Football League’s Seattle Seahawks is CenturyLink Field.

The stadium was originally named Seahawks Stadium before the naming rights were purchased on June 23, 2004 by Qwest telecommunications company, and then again changed the name in 2011 to CenturyLink.

Seattle voters approved the funding for the contraction project to build a new stadium back on June 17, 1997. The construction of the stadium itself tok place between 2000 and 2002.

It’s regularly considered one of the loudest stadiums in the country, in part due to its design which works to trap in the fan noise. It was once the Guinness World Record Holder for the loudest outdoor stadium crowd roar at 136.6 decibels. The record has since been passed around a number of times, but currently resides with the Kansas City Chiefs’ fans at Arrowhead Stadium.

The venue also features an Event Center with the WaMu Theater, a public plaza, and a large parking garage.

In addition to being the home of the Seattle Seahawks, it’s also the home field of Major League Soccer’s Seattle Sounders FC.

• Construction started on the exhibition center and parking garage of the venue in September of 1998, and by October of 1999 it was already open and hosting regular events.

• On June 23, 2004 the naming rights were sold to Qwest, a telecommunications company, who was later bought out by CenturyLink in June of 2011, who changed the name of the stadium to its current name, CenturyLink Field.

• On September 15, 2013 in a game featuring the Seahawks vs their NFC West rival San Francisco 49ers, the CenturyLink Field fans set the record for the loudest outdoor crowd roar at 136.6 decibels.

• In 2015 a privately funded renovation by the Seahawks expanded the Toyota Fan Deck with a new 12 Flag raising platform and 1,000 new seats.