The former record had been set by the Orlando Magic in 2009 and matched by the Rockets in 2013. So, it was held for a few years. But this one—this one didn’t even make it three months.

The Cleveland Cavaliers reset the record against the Atlanta Hawks Friday night by making 25 of 46 attempts from behind the arc. However, as nice as the shooting display they put on was—it nearly didn’t matter.

While the three-point barrage gave Cleveland a healthy lead for much of the game, the Hawks never stopped pushing and played well overall. Typically, when a team makes 55.6 percent of their shots in the half like they did in the first, they lead at the break. But the Cavaliers hit 14 of 23 three-point attempts and took a 77-60 advantage into the break.

About midway through the third period, the Cavaliers extended the lead out to 25 points, 92-67. While a comeback was possible, with how the game was going, you wouldn’t have expected it to happen. But then the craziest thing (as far as Cleveland fans were concerned) occurred.

The Hawks mounted a spirited comeback. After being outscored 15-7 in the first five minutes of the second half, Atlanta outscored Cleveland 21-14 to close the gap to 18 points, 106-88.

With the fourth period still left a comeback was still unlikely, but it was beginning to look possible. Shots continued to fall for the Hawks, and when Paul Milsap hit a jumper over LeBron James with a minute and a half to play the Cavaliers only led by a single point, 124-123.

“Kyle knocked it down when it mattered the most,” said Atlanta’s Tim Hardaway Jr. after the game. That’s why he’s one of the best shooters.”

But while the Hawks were able to make it interesting, they were not able to complete the comeback. Kyle Korver, who the Hawks traded to the Cavaliers in January, hit the record-breaking three-pointer (No. 25) to give Cleveland a four-point lead with 1:16 left to play.

Atlanta outscored Cleveland 42-29 in the final period and would pull within three a few times down the stretch.But in the waning seconds of the game, Kyrie Irving hit a pair of free throws to end all scoring and make the final 135-130, Cleveland.

“I was proud of the way the guys kept fighting,” said Hawks coach Mike Budenholzer (NBCSports). “We’ll get better. We’ll learn from tonight.” 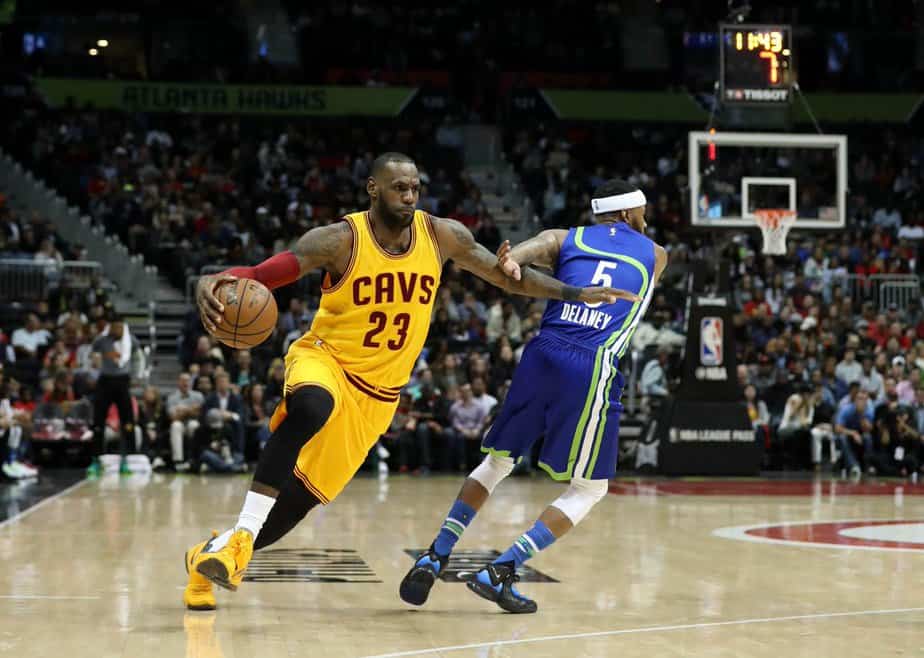 LeBron James led the Cavaliers in three-pointers with six but did not lead in points. He scored 38, but Kyrie Irving had 43 (made five three-pointers). Four players, including Korver, hit three each. Tim Hardaway Jr. led all scorers for Atlanta with 36 points and hit five of his nine three-pointers. The rest of the team made 5-17.

Had the Hawks managed to pull off the comeback, the record would have meant little. Yes, fans love records, but they love wins even more. Had they lost, anytime the record came up the counter argument would quickly be “So what? They lost that game so who cares how many three-pointers they made?” But they won. So fans can remember it and smile.

Cleveland will try to keep the good times rolling when they play the Heat in Miami Saturday night. Atlanta will try to get back on the right side of the scoreboard Sunday afternoon when they take on the Indiana Pacers at home.