Can Texas A&M Handle The Spotlight The CFB Playoff Committee Put On Them?

Texas A&M has been a good football team ever since it joined the SEC—but it has been far from a great one. Johnny Manziel’s first team could be considered great, but since then they have barely been good. They’ve had trouble holding onto quarterbacks, keeping kids out of trouble, and fielding a defense that can stop a pee wee team.

But a lot has changed.

Trevor Knight has not been great, but he has proven to be good enough. It’s been awhile since there has been news of a player getting arrested, and hiring defensive coordinator John Chavis away from LSU could be the defining moment of head coach Kevin Sumlin’s career.

Rather than take on a bunch of soft teams in the first half of the year like they usually do, the Aggies have had a pretty challenging schedule. So while being 7-1 in past years wouldn’t mean much, this year it does—and the College Football Playoff Committee has decided to recognize that and name them the No. 4 team in the nation in their first poll (Alabama, Clemson, and Michigan are No. 1, 2, and 3).

Yep, as of now, Texas A&M has a seat at the table for the college football playoffs.

The move surprised many. How could the committee deny the undefeated Washington Huskies?

“We had a lengthy discussion on the spot,” selection committee chairman Kirby Hocutt said. “Washington is a well-balanced team, and they had a good win on the road against Utah. But in the committee’s mind, Texas A&M has played a stronger schedule.”

As much as people may want to deny it, it’s true. UCLA, Tennessee, and Arkansas were all ranked teams when the Aggies faced and defeated them. Auburn wasn’t ranked during their Week Three match-up with the Aggies, but they came in at No. 9 in the committee’s first poll. Yes, they lost to Alabama, but they played a lot better than a 33-14 score would typically indicate.

Washington, on the other hand, only has one impressive win on its record, last week’s 31-24 win over No. 17 Utah on the road. Stanford was ranked No. 7 when they demolished them, but the Cardinal didn’t look like a good team then and don’t now.

To quantify the difference in schedules, Texas A&M’s has been rated as the 26th toughest in the nation while Washington’s was rated No. 69. That’s a pretty significant difference (ESPN).

ESPN’s SOR metric backs up the committee. According to it, the bigger challenge would be for Texas A&M to go 7-1 against their schedule than for Michigan and Washington to be undefeated on theirs.

Of course, the important thing to remember is that the first CFB Committee poll means absolutely nothing. The only one that matters is the last one, and to remain in the No. 4 spot (or better) Texas A&M must win out—and even that may not be enough.

They should be able to, but now that the spotlight is shining brightly on them, will they step up to the challenge or wilt under pressure? They are favored to beat Mississippi State by two touchdowns, but the Bulldogs have a pretty decent rushing attack (No. 35; 209.6 yards/game). Texas A&M as struggled against the run (No. 74; 176.5 yards/game).

If they get Mississippi State, Ole Miss will present a pretty big challenge and then there’s LSU to finish the regular season. The Tigers have looked much better since Ed Orgeron took over, but their passing game is still atrocious—but they will not look to pass much against the Aggies. LSU ran for 244 yards on the Aggies last season (Leonard Fournette—32 carries for 159 yards and a touchdown; Derrius Guice—10 carries for 73 yards and a touchdown). 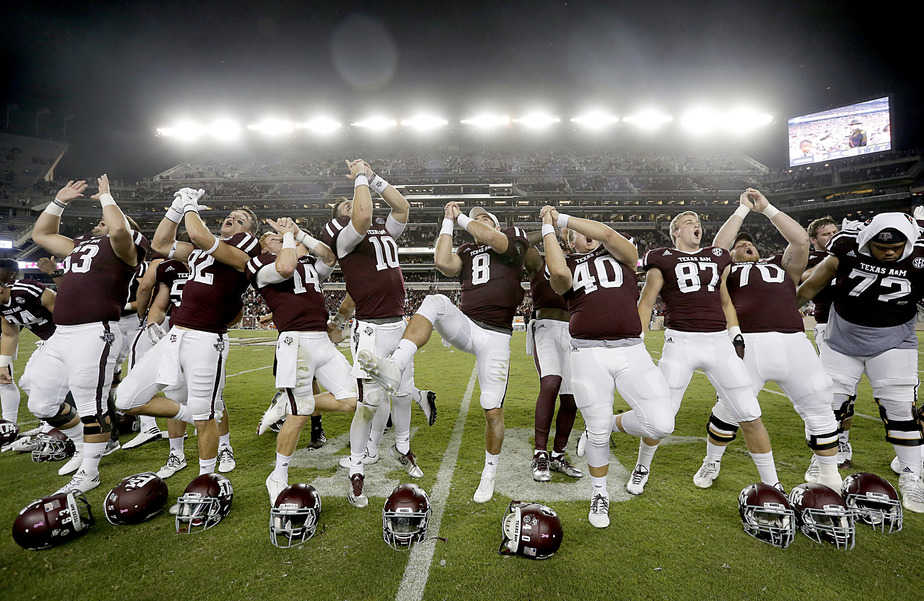 Even if they do win out against what ESPN’s Power Index rates as the 40th toughest remaining schedule, some big games are coming up, that could severely impact how the top four end up. What if Alabama loses to LSU or Auburn? Will a win over Michigan propel Ohio State into the top four? Would the loss knock Michigan out? Would beating Alabama be enough to get Auburn in despite two early losses? Can LSU lose a game and still make it in? Three of their last four are ranked teams (Alabama, Florida, and Texas A&M), and Arkansas will not be easy.

Can Washington make it in with such a soft schedule even if they win out (No. 25 Washington State only ranked opponent)? Louisville’s schedule is soft as well so are they done? If the Texas A&M wins out and LSU only loses to the Aggies, but Clemson wins ugly against their weak schedule, will LSU push them out?