When it comes to sports and the Baylor Bears, the talk typically centers on the football team, but the basketball team is doing its best to change the dynamic. Moving up to No. 1 in the AP and Coaches Poll this week should go a long way towards achieving that goal.

Villanova had been the No. 1 team for the last five weeks, but after losing to Butler last week, their reign at the top was bound to end. The Bears had been the No. 2 team and remained undefeated with wins over Iowa State and Oklahoma State last week making them the obvious choice to move up. 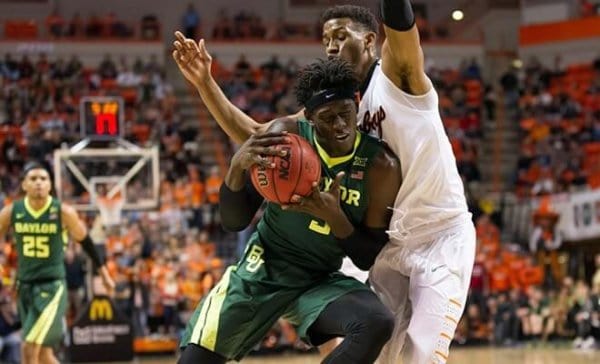 “As I shared with the players, not many people get a chance to be ranked No. 1, and that’s a great honor,” Baylor head coach Scott Drew said following the win over Oklahoma State Saturday. “Baylor Nation deserves it because they helped us get here. We’re glad to make them proud and happy, and it gave them something to be excited about. But big picture, we know no one is going to remember who is ranked No. 1 the first week of January.”

They were No. 3 in the Coaches Poll last week, but moved up to No. 1 this week after receiving 22 of 32 first place votes.

Baylor didn’t receive a single top 25 vote in the preseason in either poll. The team debuted at No. 20 in the AP Poll following a 3-0 start that saw them beat No. 4 Oregon 66-49 for their second win of the season. Since then they have taken down three other ranked teams (No. 24 Michigan State, No. 10 Louisville, No. 7 Xavier) while remaining one of the few undefeated teams in the nation.

The Bears didn’t break into the top 25 in the Coaches Poll until Week Four when they debuted at No. 11.

If the Bears are going to remain undefeated and ranked No. 1 in the nation, they are going to have their work cut out for them this week with games against No. 10 West Virginia and No. 25 Kansas State.

Both teams should provide the Bears with a good challenge, but both are winnable. Should Baylor survive both, their next tough challenge will come February 1 when they play No. 2 Kansas for the first time this season.