Baylor Bears-No. 11 Oklahoma Sooners Preview: Can Baylor Get It Together?

The Baylor Bears and Oklahoma Sooners came into this season with national title aspirations, but have since seen them disappear. Oklahoma’s went south when they lost to the Houston Cougars in the season opener. Baylor’s didn’t go south until a couple of weeks ago when the Bears lost to the Texas Longhorns. While the ultimate prize is out of reach for both, the still have something to play for—the Big 12 conference title.

Oklahoma is undefeated in conference play so win out, and the title is theirs, but doing so will not be easy with Baylor coming to town Saturday, a trip to West Virginia the following week, and the Oklahoma State to end the regular season.

Baylor will need a lot of help to win the conference with losses to TCU and Texas, but they could still gain some semblance of satisfaction if they can hurt Oklahoma’s chances. However, lately, they appear to be having a lot of trouble focusing on football.

After suffering their first loss of the season to Texas, Baylor hoped to rebound against TCU last week, but the team was derailed when the local media printed a story that included a member of the Baylor’s Board of Regents claiming former head coach Art Briles failed to report at least one gang rape.

This resulted in a lot of bad feelings between the coaching staff (most had worked for Briles) and the University and led to rumors that the team wore black uniforms last week to protest Briles being fired; a story that was eventually debunked.

If the coaches are not focused, the players probably aren’t either—which would explain why a mediocre TCU squad looked like the best team in the nation as they crushed Baylor 62-22.

Since losing to Ohio State in September, the Sooners have been cruising against the competition. They’ve had some close games with their defense not playing particularly well, but the offense has managed to outscore everyone. They gave up 46 and 40 to TCU and Texas but put up 52 and 45 themselves to get the win. Texas Tech put up 59 points, but the Sooners put up 66.

Both offenses are ranked in the top five in the nation (Baylor—No. 5; Oklahoma—No. 3). Under Art Briles, the Bears were the premier passing team in the country, but this year their strength has been in the running game (No. 6; 278.8 yards/game). Baker Mayfield has been a passing machine for the Sooners (No. 7) and an efficient one at that (No. 2). Baylor still has a good passing game (No. 37), and the Sooners aren’t a bad rushing team (No. 32). 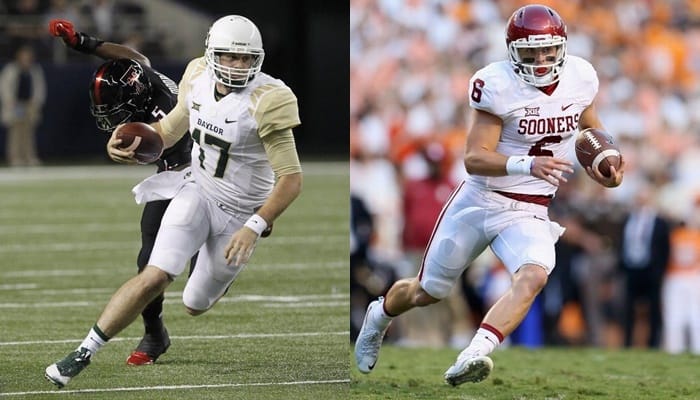 What will be interesting to see is if either team tries to stick with their strength or if they focus on exploiting the other’s defensive weakness. The Sooners are a tremendous passing team, but the Bears secondary has only been allowing 189.1 yards/game, but the Bears struggle to stop the run. Oklahoma’s rush defense has only allowed about 124 yards a game on the ground, but the secondary has allowed close to 300 yards a game.

The game will likely be a shootout of epic proportions with both teams breaking long runs and hitting deep passes all game long. It would be nice to think someone’s defense will step up—and there likely will be a few big plays on defense—but in the end, the winner will probably be whoever has the ball last.

That is, as long as Baylor comes to play. If they come out flat like they did against TCU, Baker Mayfield is going to look like the second coming of Joe Montana, Dan Marino, and Steve Young all rolled into one.