Watching a team dominant another can be entertaining, but it gets old. Where’s the fun in watching someone get their pride handed to them for a couple hours? Seeing it once can be cool, twice alright, but after the third you just want it to end. It quits being entertaining—unless you are a fan of the team doing the butt-kicking, of course.

It looked like the Bulls were going to pull off the upset of the ages after the first two games of their opening-round series against the Celtics. But a Boston win in Game Three put a pause on the Celtics demise. But what could a win in Game Four bring?

As for the Jazz and Clippers, injuries have had an impact on the series so far with Rudy Gobert going down early and now Blake Griffin going down. But Gobert made his return Sunday night in Game Four. Could he shift the balance of power in favor of the Jazz?

No one would have faulted Boston Celtics star Isaiah Thomas for not playing after the death of his sister. But he has done his best to soldier through the pain and get the job done for his team and the fans. While he hasn’t been great, he hasn’t been bad either. However, the team did fall behind 2-0 to start the series.

If they are going to overcome the deficit, the Celtics need their primary scoring threat to bring his “A” game back to the court—like he did Sunday night. Thomas scored 33 points to lead the Celtics to a much-needed road win.

After the game, Thomas talked a little about how hard the days following his sister’s death have been:

“[My teammates] give me a lot of confidence. I can’t do it without those guys. They believe in me,” Thomas said (ESPN). “Being here is what makes me, I guess, sane. It makes me feel somewhat normal through these tough times.”

Boston started the game with a 30-18 advantage after the first quarter. Chicago would go on to win the last three-quarters, 77-74, but enough damage had been done in the first.

Bulls head coach Fred Hoiberg accused the refs of taking it easy on Thomas after the game. His comments elicited the perfect response from Thomas:

“That’s not the reason why I’m an impossible cover.”

If the Bulls are going to regain control of the series, they will need to figure out how to cover Thomas in Game Five Wednesday night. 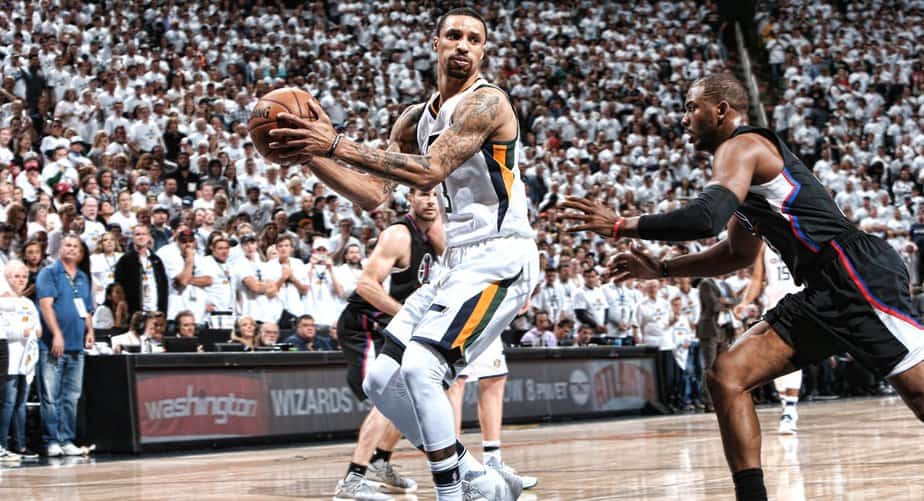 Blake Griffin has had plenty of injury issues the last couple of years, so playing without him would be nothing new. Of course, you want to have your best players in the post season, but with guys like Chris Paul and DeAndre Jordan on the roster the Clippers are built to survive without Griffin.

But someone would need to step up and produce in his absence—or at least keep the Jazz from producing.

The job should have been easier with Gordon Hayward forced out early in the game due to food poisoning, but the Jazz got a tremendous lift off the bench from Joe Johnson, Derrick Favors, and Rodney Hood.

Johnson, a 15-year veteran, made 12 of his 17 shot attempts to lead the Jazz with 28 points including 11 in the fourth quarter and the decisive basket that put the Jazz ahead for good (at the 3:55 mark; made the score 91-90 at the time).

“Just trying to be aggressive and make plays,” Johnson said. “We had to get stops, which kind of fueled our offense. … We were getting into the teeth of the defense, whether we had layups, dunks or kick-outs for 3s thought we did a good job of making the right decision.”

The Jazz got Rudy Gobert back in the line-up for the first time since he went down with a knee injury in the opening seconds of Game One. He ended up playing 24 minutes and turned in a double-double with 15 points and 13 rebounds.

Chris Paul did his best to carry the Clippers with 27 points, 12 assists, and nine rebounds. He got some help off the bench from Jamal Crawford (25 points; 5-7 from three-point range). But it wasn’t enough to overcome Utah’s bench.

Game Five will be back in Los Angeles on Tuesday at 10:30 PM ET on TNT.