Indianapolis Colts-Minnesota Vikings Recap: Don’t Count The Colts Out Yet!

It will take a minor miracle for the Indianapolis Colts to make it to the postseason this year. After losing to the Texans in Week 14, their only hope would be to win out and hope that the Texans and Titans lose two of their final three. An unlikely scenario, but not an impossible one.

They can’t control what the Texans and Titans will do, but they made it clear against the Minnesota Vikings Sunday afternoon that they are going to do whatever they can to keep their slim playoff hopes alive as long as possible—starting with a dominant win over the Vikings. 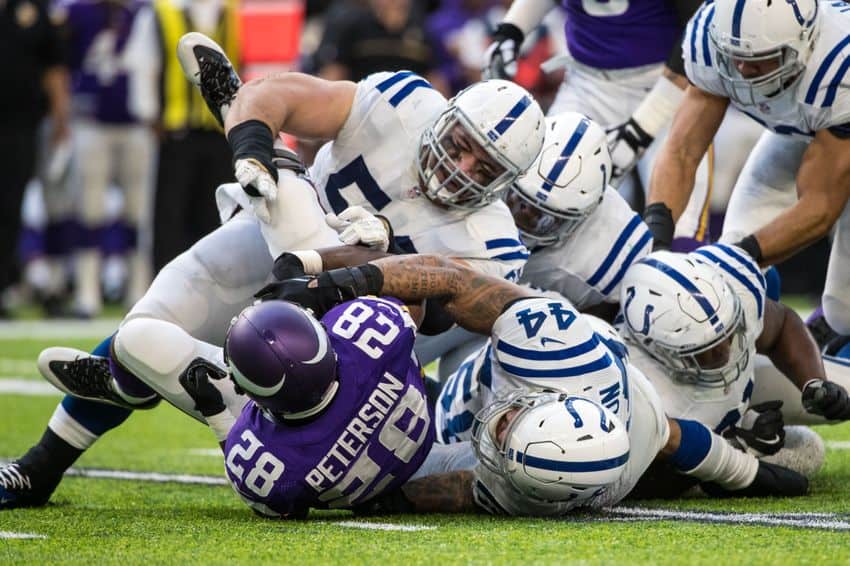 With how the Colts have struggled to protect Andrew Luck and open holes for the running game this season, it was not hard to imagine the Vikings defense having a statistical field day against the Colts. But that ended up being far from the case.

Andrew Luck had one of his most efficient days of the season completing 75 percent of his passes (21-28) for 250 yards and two touchdowns. He guided the offense to a field goal and touchdown on their first two drives of the game, and by time the half ended, Luck had the Colts out to a 27-0 lead against the No. 3 defense in the NFL.

He got a lot of help from running back Frank Gore who has just his second 100+ yard day of the season with 101 yards on 26 carries. It certainly helped that the Colts offensive line was able to create some nice gaps in the Vikings 18th ranked run defense.

“Nobody thought the O-line was going to come and do the job that they did,” Colts head coach Chuck Pagano said. “They all got game balls. Those guys manned up, and they did one heck of a job against a really good defense, the No. 2 defense in the National Football League.”

The much-maligned Colts offensive line has given up 40 sacks this season (third highest in the NFL). With yet another new combination starting against the Vikings, it would not have been shocking to see Luck get flattened a few more times. But instead, they managed to keep Luck from being sacked at all for the first time this season (nine sacks in the last six games after allowing 31 in the first eight).

There was concern over the unexpected return of Adrian Peterson to the Vikings offense, but the Colts had no trouble containing the veteran back holding him to 22 yards on just six carries.

“We’re good enough to play with anybody,” Colts linebacker Robert Mathis said. “We just have to show up every week. Any given Sunday you can get embarrassed.” 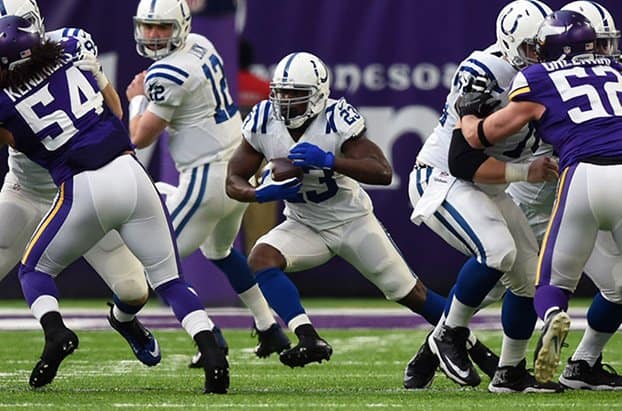 This time it was the Colts doing that were embarrassing the other team. After getting out to a 27-0 halftime lead, the Colts took it easy in the second half scoring just seven making the final score 34-6.

With the win, the Colts improve to 7-7 on the season, but the Texans and Titans won improving their records to 8-6. To make the playoffs, the Colts still must win out and need help. The Texans need to lose both remaining games (to fall to 8-8). Tennessee needs to lose to the Jaguars this weekend and beat the Texans next weekend to end the season with a 9-7 record (Colts win division due to head-to-head tiebreaker).