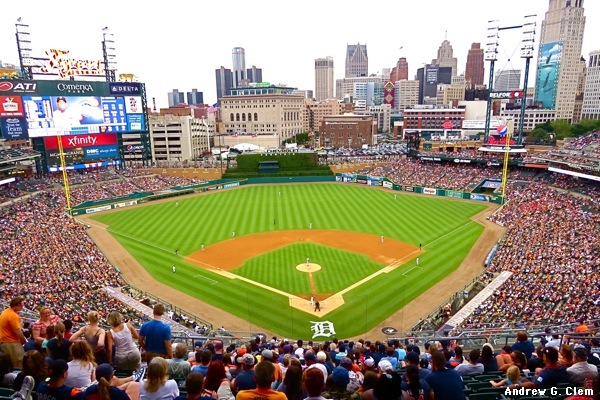 The new stadium was built in 2000 to replace the Detroit Tigers’ old home stadium, known as Tiger Stadium, where they played for 88 years.

Similar to the Tigers’ old home ballpark, the stadium is an open-air field played on natural Kentucky bluegrass field.

Unlike its predecessor, the old Tiger Stadium which was considered a very hitter-friendly park, Comerica Field is renowned for being a pitcher-friendly park and the outfield fences have been brought in closer multiple times.

• By the mid-1990s, the old Tiger Stadium was already over 70 years old and it was clear that another round of renovations wouldn’t keep the park up to par with the modern MLB standards, so plans were hatched for what was to come Comerica Park.

• Construction for the new stadium was started on October 29, 1997 and completed under three years later when the park opened on April 11, 2000 for the Tigers’ Opening Day.

• Comerica struck a deal for the naming rights to the stadium in December of 1998 as they agreed to pay $66 million for the rights over a 30 year contract period.

• The record attendance for the stadium was reached in a regular season game against the Chicago White Sox back on July 26, 2008 with 45,280 fans in attendance.