February has definitely been going much better for the Cleveland Cavaliers than the month of January has been. Going into Thursday night’s game against the Oklahoma City Thunder they were on a four-game winning streak and had yet to lose this month. Yes, they had only played four games this month. They didn’t win more than two in a row in January, so four in a row is a step in the right direction.

But could they make it five? 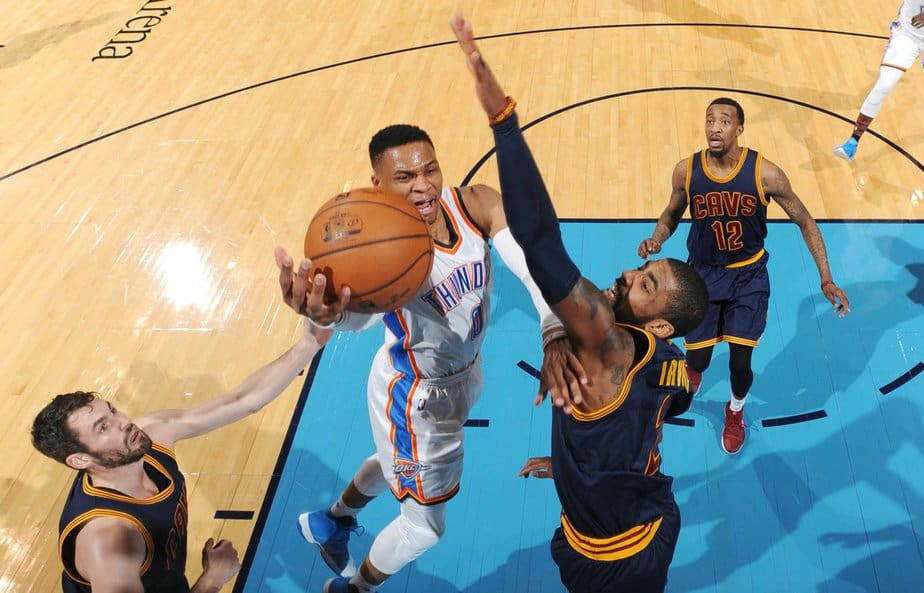 Russell Westbrook’s play this season has made Oklahoma City a team that can’t be overlooked, so if the Cavaliers were going to make it five in a row, they would need to bring their “A” game. This would mean no one gets to skip the game for rest.

After a big win over the Indiana Pacers the night before, Cavaliers head coach Tyronn Lue considered giving his big three the night off against the Thunder—but instead, he had them all play.

“It was good to go through something tough,” Lue said after the game. “It was a tough game for us. Four games in six nights, and it was good to fight through and not give in, so our guys came out and played. I liked how we competed.”

They gave it a good effort. Kyrie Irving scored 28, LeBron James added 18, and Kevin Love chipped in 15 points to go with 12 rebounds—but it wasn’t enough. Russell Westbrook recorded his 26th triple-double of the season with 29 points, 11 assists, and 12 rebounds to lead the Thunder to an 118-109 win over the Cavaliers.

Oklahoma City got out to a strong start and held a 29-21 lead after the first period, but the Cavaliers found their shot in the second and took a two-point lead into halftime, 57-55. Westbrook nearly had a triple-double by halftime (10 points, nine rebounds, eight assists).

James Jones finished off the scoring for the night with a late three-pointer to make the final 118-109, Oklahoma City.

Westbrook got off to a slow start on the night and didn’t hit his first basket until half way through the second period, but he got a lot of help from Victor Oladipo (23 points and seven rebounds) and Steve Adams (20 points and 13 rebounds).

After the game, the media wasted little time in turning the focus to Saturday’s big game for the Thunder against the Golden State Warriors and featuring the return of Kevin Durant. Westbrook didn’t provide Durant and the Warriors with bulletin board material. All he had to say about it was: “I’m looking forward to it.”

Cleveland will look to get back on track with a home game against the Denver Nuggets.